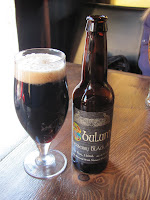 There was an article in the Toronto Star this week about a pub in Toronto called The Caledonian which had a great selection of bottled beer from Scotland. One I found quite interesting was Ebulum Elderberry Black Ale by Williams Bros Brewing Company located in Alloa, Scotland.

Last night Teena and I headed up for a taste and some supper. Her review of the pub is here and mine is here.

The brewery was started in 1988 by brothers as the name implies, Bruce and Scot Williams. The first beer they brewed was from an 17th century recipe using sweet gale and heather flowers. Now 23 years later along with their line of what they call "contemporary ales", they also brew 5 historic ales based on recipes they have found from centuries before.

Their Elderberry Black Ale recipe was "taken from a 16th Century record of domestic drinking in the Scottish Highlands. Introduced to 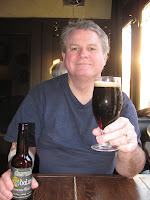 Scotland by Welsh Druids in the 9th Century, elderberry ale was part of the Celtic Autumn festivals where the ale was passed round the people of the village.

In medieval times elderberries were used for many natural remedies and are known to be high in fruit tannins and oils. It is a rich black ale with fruit aroma, soft texture, roasted grain and red wine flavour, with a gentle finish."

The ingredients are listed as Water, Malted Barley Bree, Hops, Elderberries, Roasted Oats and Barley. I Googled Malted Barley Bree to see what that is but the only explanation I constantly found was "Liquor made from barley; strong ale" which makes no sense. In fact, many websites I found were asking the same question in regards to Williams Brothers ales.

It poured black into the glass with a thick brownish head. The aroma of the malt was quite strong. When I took a sip, I was surprised by its creamy texture. The ale had a strong taste of chocolate and coffee but those flavours seemed to disappear in the finish yielding to a taste of berry or cherry. This obviously was the elderberry which I was tasting. I was quite surprised at how such a pronounced taste from Malted barley and roasted oats could quickly fall away to the elderberry finish.

I finished this ale much quicker than I usually would, as I enjoyed the way this beer constantly finished. A very enjoyable beer and one that I would have again, next time I visit The Caledonian.
Posted by Swordsman at 10:34