Beer of the Week - Harvey's Bitter 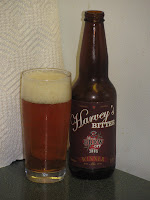 For Christmas this year I received a very unique beer from Teena's sister Sarah, and her husband, Joey. They live in Halifax, Nova Scotia, where Joey's boss ,Justin, is a home brewer.

In 2009, Garrison Brewing held their very first ever Garrison Ultimate Brew-Off. The style of beer for the 2009 brew-off was Standard/Ordinary Bitter. Participants had to brew a 20 litre (5 gallon) batch of beer for the contest. When the judging was over, Brian Harvey has won with his Harvey's Bitter.

So what do they win, besides the glory? The winner goes down to the brewery and has their winning brew replicated, labeled and bottled for sale. They did that in the spring of this year.

I'm not sure that Justin had a hand in developing the award winning recipe but he was in on the brewing. After all he is mentioned on the side of the bottle:

What a thrill for a home brewer!

So Christmas Eve when I opened up a certain gift, there was a bottle of Harvey's Bitter and I knew what this week's beer of the week would be.

The beer pours an amber, maybe dark amber colour, with a nice head. I let in sit for a few minutes and found the head stayed well. The beer has a nice aroma. Maybe a little nutty but the malt is coming through.

alcohol, I was very surprised at how much flavour there is throughout this beer. In true tradition of a bitter, the hops are present from start to finish but not in an overpowering way, but very present.

I love a beer like this and certainly can see why this was a winner. I would have this beer anywhere anytime.

I would drink this often if it was available.

Sadly, and I hate to bitch about a present received, but Sarah and Joey only gave me one!
Posted by Swordsman at 15:13

Yay - Gord like it! Great review! Justin will be pleased to hear you liked it and gave it a great review.