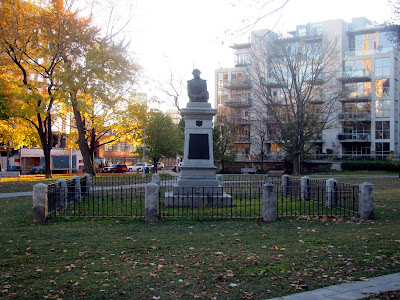 To commemorate Remembrance Day, I paid a visit to Toronto's first military cemetery.

It was created back in 1794 by Toronto's founder Lieutenant-Governor of Upper Canada, John Graves Simcoe. Sadly one of the very first burials was his 15 month old infant daughter, Katherine, who died of fever.

As well as being the first cemetery for the town of York, as it was known then, it was also the first military cemetery for those who passed away while serving with the garrison of Fort York. It also held the graves of those who died in battle defending York during the American invasion in April 27, 1813.

Teena and I never knew of this place until one day a couple of years ago, we did a tour of the neighbourhood led by a Fort York historian. At the time, the remaining head stones were laid at the base of the monument to those who died during the war of 1812. We were told of plans for to restore the park and I was delighted when I returned today to see the changes that had been made.

The original cemetery was laid out on an angle to the streets around it and a granite outline now shows the original burial area. Only 17 of the approximately 500 headstones remain and they are now mounted along a granite wall on the southeast border of the cemetery.

The memorial is interesting. It was created by Toronto architect Frank Darling in 1902 and in 1907 a sculpture by Canadian artist Walter S. Allward was set on top to complete the memorial.

The sculpture "Old Soldier" sits on top of the monument in Victoria Square, looking out over the cemetery that contains long-dead fellow servicemen and their families. He is not a specific historical figure, but a representation of the "universal" soldier from the 1812 era. With his empty left sleeve, balding head, lined face, and sorrowful eyes, Allward's soldier does not resemble a vigorous and triumphant young warrior, but a weary and solemn veteran who can testify to the terror of war."

Oh, and Walter Allward went on to do The South African War Memorial which stands on University Avenue, north of Queen Street, and most famously, the Canadian War Memorial at Vimy ridge.

Victoria Memorial Square was designated as a National Historic Site of Canada in 2003. It is an important part of Toronto's history and a very nice spot to visit. 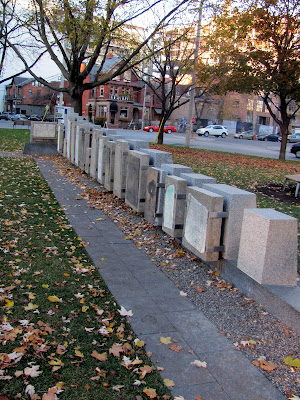 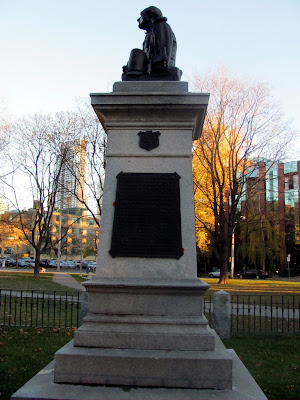 The granite outline that marks the original burying ground 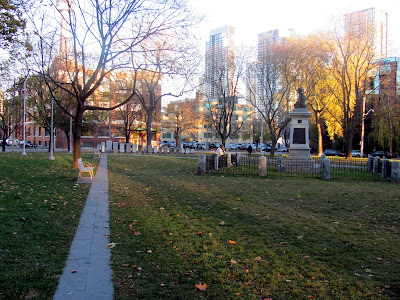 A plan is in the works to connect Clarence Square with Victoria Memorial Square via green boulevard on Wellington...

Councillor Adam Vaughan and City Parks and staff invite you to a:
Community Meeting about
Clarence Square Park and Wellington Greenway
Date:
Wednesday May 4, 2011
Time:
7:00 – 9:00 pm
Location:
Metro Hall 55 John Street Room 310
Plans are being developed for improvements to Clarence Square Park and to green the wide boulevards on Wellington Street West linking Clarence Square and Victoria Memorial Square. Join Councillor Vaughan and City staff from Parks and the Public Realm office to hear about the plans and provide your feedback.
If you have any questions or would like to be added to our distribution list, contact us at 416-392-4044 or email Councillor_Vaughan@toronto.ca.