Beer of the Week - Urthel Hop-it 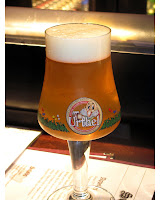 Last night Teena and I were on a walkabout and came across the pub, Sin and Redemption. I had heard quite a bit about this place on the Bar Towel website so we checked it out.

The bar area was nice, the amount of beer on tap and the quality of brews offered was excellent. The staff was excellent and quite friendly as well. The furniture was jammed together in all three rooms which made it all seem very crowded. Teena and I took a spot at the bar, my favorite place to be in a pub.

The place had many international beers, many from Germany, and one that really stood

out to me, Urthel Hop-it. Urthel Hop-It is brewed with only malt (pils) and three European Nobel hops. It's a truly unique beer for hop lovers. Pale golden in color with billowing white foam, the nose is hoppy and spicy.

When I got home, I Googled Urthel and was surprised. Belgium beers always seem to come from century old breweries so to me. Finding that Urthel has only been around since 2000 was quite unusual. The brewery was started by brew engineer Hildegard van Ostaden (pictured right) who does the brewing and her artist husband, Bas, who does all the artwork on the labels and tap handles. 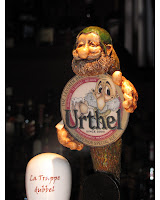 The brewery started in Ruiselede, Belgium but since 2006 have been produced, according to the authentic flemish brewing style, at Koningshoeven in Tilburg, Holland.

Of the three beers they produce, the lightest beer is their Urthel Saisonnière at 6%. The Hop-it comes in at 9.5% but is not their strongest, which is the Samaranth 12 Quadrium Ale weighing in at 12%. 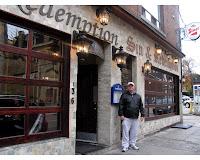 malt and three types of European Nobel hops. The Hop-it pours amber in colour, with a beautiful white head which does not dissipate. Floral hop notes are in the aroma. This is a very delicious looking beer.

The taste lives up to its look. It is fabulously hoppy but the hops are not overbearing. It is a very nicely balanced beer, one which I enjoyed every sip of.

My mission now has become where else to find this great beer in Toronto. I checked the LCBO website but they do not carry it in bottles. Now to find out which places carry this on tap. Hopefully someplace local.

I would hate to think that this is my first and last time having a Hop-it!.
Posted by Swordsman at 15:04

I sampled this wonderful beer at The Monk's Table on Saturday night. It's a brilliant creation. Please don't drink it all, I want to go back for more.
czzzynk