Fencing at the Cincinnati NAC- Day 1 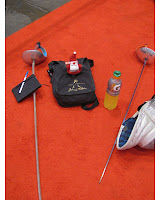 Today I fenced in the 50-59 age category at the NAC in Cincinnati.

I came into this not having practiced much due to a strain in MCL, a ligament on the inside of the knee. I have been having physio for it and it didn't feel bad going into competition.

We have a cat named Morgan, who loves to fetch toys. Teena hid one of them in my wires bag so I set him up to watch me for good luck.

The rust really showed my first three matches. My timing was off, I was pulling my arm back on attacks and my attacks were not fast and explosive as they usually are. Of course, I lost all three. I did win the next two convincingly though, which gave me some confidence going into the elimination round. I was up against Gutman, who is came into the tournament ranked third overall. My work was cut out for me. My form was coming back and although I lost 10-5, felt my game was back. I had corrected some of my earlier mistakes.

I finished the day 22nd out of 33. Not bad considering.

Should be interesting to see how I fare in the 40 and over event tomorrow.
Posted by Swordsman at 17:29

Perhaps Morgan put one his favourite toys in your bag for good luck.