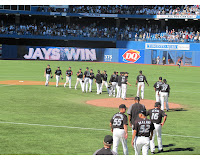 Today Teena and I headed down to the Rogers Centre to watch the Toronto Blue Jays take on the Detroit Tigers.

The Jays won last night in 11 innings and 27,119 fans were there hoping for Toronto to make it 2 in a row. Brandon Morrow was on the mound with a 9-6 record this season, and in one game came an out away from a no hitter. He faced a pitcher making only their 2nd start of the year.

Our seats were great. I got them from someone at work and were just 4 rows above the Jays' dugout. They were so close Tee 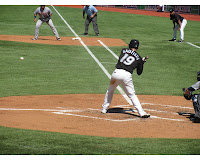 na said she could see Cito's scowl as he came off the field after arguing with the umpire about a close play at the plate.

The game had everything. A great catch by third baseman Brandon Inge of Detroit. A triple by home run hitter Jose Bautista, and a shot that missed by just a foot before bouncing off the wall dead centre 400 feet out. There were two close plays at the plate and, in the ninth, the Jays let a 5-1 score become a 5-4 comeback for the Tigers before Gregg got the last out.

Teena and I had a great time and are looking forward to seeing Seattle in those same seats on a cool September Thursday night.

With 42 home runs this year, Jose Bautista had a triple and double today. 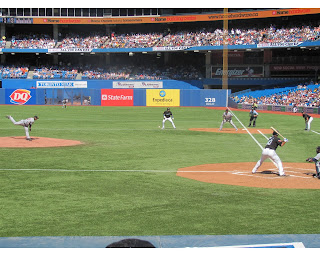 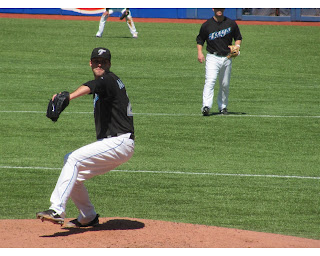 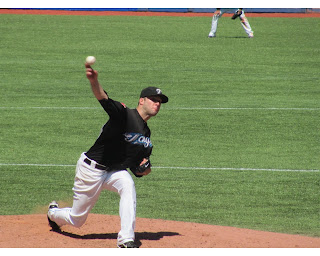 Adam Lind is interviewed after the game. 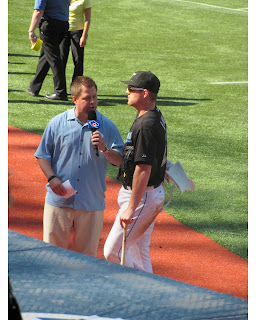