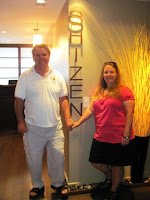 Each year instead of giving each other presents for our birthdays, we take each other to the spa.

Last March she took me to the Stillwater Spa for mine.

Today was Teena's birthday (and our anniversary, which we celebrated later in the day). I took her to the Shizen Spa in the Cosmopolitan Hotel around Yonge and King. We have thought about going there for some time. The 10 person hot tub and couple's room intrigued us.

When we arrived, we waited for about 5 minutes at reception and finally found someone when we started to tour the place on our own. It was quite unusual. We were directed where to change and then it was off to the big hot tub. The room was nice, with herbal tea and nice cold water. We arrived a half hour early to enjoy it and we did. There were also very comfortable chairs to relax in. 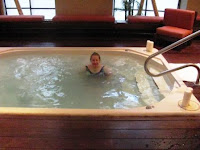 Then it was off to the private couple's room, where they had imported herbal tea, ice water and pastries, pluse a large tub to relax in. It was quite nice, although a little awkward to get in and out of. A step would have been nice as there was no way to enter or exit gracefully.

Then came massage time. Mary gave me a fabulous massage. She has been in business for 5 years and had very strong fingers that found a few pressure points I was unaware of. Teena enjoyed her massage for Christine.

Afterwards, we showered and changed and were invited back by the hot tub for chocola 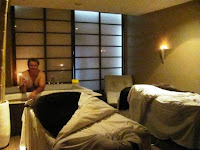 It was strange at the end, though, when I paid the bill and was asked to put my address on an envelope so they could mail the RMT receipts to me. I asked why I could not have them right away and the receptionist said this was their policy. They also charge extra for an RMT masseuse for the couple's massage.

Although we had a great time, it was a place that I would not go back to nor recommend.
Posted by Swordsman at 14:39