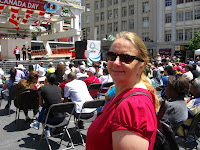 Canada Day. My favorite holiday of the year!

First of all I believe that the gods love Canada as I have never seen it rain on Canada Day. It has been cloudy but in all my 56 years it has mostly been sunny and a fabulous day to be out and celebrating.

And that is the second reason. Everyone is out and about, having fun and appreciating the fact that they are Canadian. Traditionally, we are not the beat your chest flag waving type of citizens like other counties. Just proudly quiet about it ... until July 1, Canada Day! Then we, as a nation, let loose. 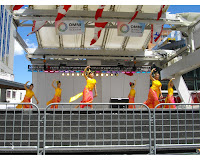 To celebrate, Teena and I went for our July 1 walkabout. We hit Dundas Square where they were featuring the diversity of our nation with dancers from around the world. I was disappointed to miss the set from the First Nations which started at noon. We did catch the folk dancers from Thailand, which were very good and seemed to enjoy their performance, except for one dancer who scowled her way through.

After we hit the 3 Brewers, which I thought was a Quebec micro brewery chain but was started in France. They have some very beer and food. I had a great wheat ale while Teena ordered a Blonde, which was the one I ordered later. We both ordered Flamms, which originated in Alsace Fra 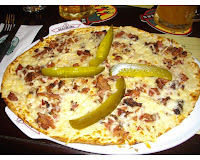 nce and is a kind of a pizza, without sauce on a type of flat bread. It is delicious! Teena had the Italian with Italian hot sausage and peppers, while I had the Smoked Meat with, of course, smoked meat, Gruyere cheese and dill pickles. Yes, I wondered about the pickles but they are put on after and it worked.

Dundas square and 3 Brewers was a great way to spend the afternoon.
Posted by Swordsman at 16:46