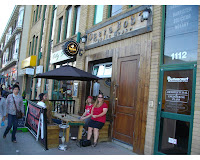 Teena and I hit Opera Bob's on Dundas W at Ossington.

We were there a couple of weeks ago and thought it was a great spot. We heard they had some Canada Day events going on so we wandered by on our way home from downtown.

And we were glad we did.

There is a great vibe to this place, the same one we felt the first time we were there. The place was near full as many were there getting ready for the Toronto FC soccer game, which ended in a 1-1 tie.

Opera Bob's has great craft beers on tap and today they had a rep from Mill Street Brewery there giving out free samples of their great beer. Opera Bob's also served up fabulous homemade BBQed burgers, the only thing on the menu this day. 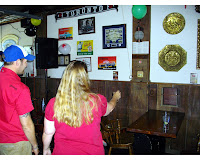 They also had a band, the Unknown Culprits, which we had heard before. They are a great cover band, with some of their own stuff and a great lead guitarist. They cover mostly songs from the seventies and early eighties. A couple of times they played songs the crowd requested and sang along to. Stompin' Tom's The Hockey Song was a huge hit. They also called up Opera Bob, one of the owners, to sing a couple of tunes. Bob used to be an opera singer, thus the name of the place, and has great voice. He is pictured in the ball cap to the left of the stage. You could tell he was an excellent baritone. It was fun and the crowd enjoyed him singing.

They also have this infuriating game. A hook is in the wall and a ring hangs from a string. You are supposed to release 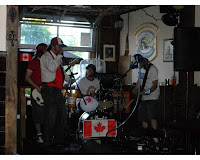 the ring so it hooks onto the hook. Apparently the bar record is 10 times in a row. A regular showed me the trick to it. So in maybe 100 tries I got it once. Pictured is Teena giving it a go.

I have always wished there was a pub in our 'hood that was a fun place to be. One that was friendly, reasonable, and comfortable, I think we may have found it here.

After a great burger, a few pints and some great free samples from Lucy from Mill Street Brewery, we had to go.

Damn it! I have to work tomorrow.


Wise words written above the water closet in the men's room. 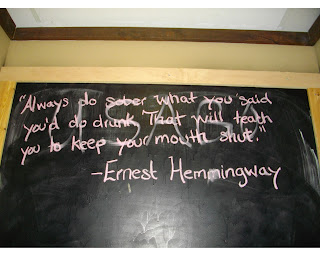