Catching Up at the Ball Game 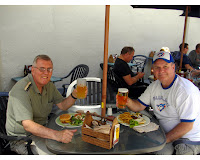 After 27 years of working for the Hydro, I left in 2001 to pursue another career.

During my time in the warehouse, I worked and became good friends with Randy. Even though we live in the same city, he up in the boonies of Scarborough and me downtown, we seemed to have a tough time getting together. We would call each other on occasion but haven't got together in at least a year and a half, maybe more. We always spoke about getting together sometime but never set a date.

This week we decided to get together for lunch and a Jays game.

We hit Gabby's on King street for a lunch and a couple of beers, then headed for the ball 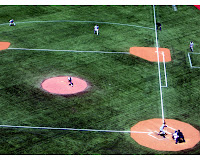 It was a bright, sunny and hot day and the game turned into an extra inning marathon. After 11 innings, we decided to bail and finish watching the game from the air conditioned comfort of the Beer Bistro, one of my favorite spots in the city. I introduced Randy to the refreshing wheat beer, Blanche de Chambly, which he enjoyed so much that he elected to try another wheat beer.

After 14 innings we watched the Jays win, then spent another hour yakking. It was a fun afternoon and great to finally get together to catch up. We vowed not to let it go so long again and are going to take the Friday afternoon off when the Indy comes to town in July and head down to the first day practice sessions.

It's too easy to let things slide.
Posted by Swordsman at 20:55