Beer of the Week - The Cannery Collection 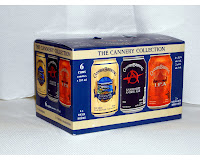 That's when you decide to try a few different beers in the same sitting. Should you start with a heavy, full tilt, hoppy IPA, then switch to a lighter style beer, say a wheat beer, the flavour of the wheat beer will be squashed and will taste like water.

Teena was in Vancouver and picked up a 6 pack of the Cannery Brewery Collection, made by, of course, Cannery Brewing. The 6 pack contains 2 Anarchist Amber Ale, 2 Naramata Nut Brown Ale and 2 IPA.

Their website gives the progression, "Start with the full bodied harmony of our Anarchist Amber Ale then move to the smooth velvety taste of Naramata Nut Brown Ale and finish with the intense malt and hop character of the India Pale Ale"

The idea for the brewery came to Brew Master Terry Schoffer in 2000. He then teamed up with Ron and Patt Dyck, who had been operating their restaurant for 23 years and were looking for a new challenge and loved brewing. In 2001, on April Fools day, they brewed their first batch of beer in Penticton's Old Aylmer Fruit and Vegetable Cannery located right in the heart of wine country.

Their first bottles were the Grolsch style, EZ top bottles and, in 2006, bought a canning unit. As of November 2009, they were the 17th largest brewer in BC, according to the Penticton Western News. 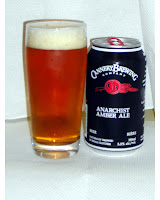 First of all I do love the name. Lots of fun. The beer pours an amber colour true to its name and a slightly tanned head which holds. There is a slight hoppiness to the nose. The taste starts with a nice balance of malt and hops but finishes with a pronounced metallic aftertaste. Unfortunately it is the metal taste which stays.

The metallic flavour stayed in my mouth spoiling each additional sip. I did rinse my mouth out but still found the same coppery metallic taste. This could have been a very enjoyable beer otherwise. 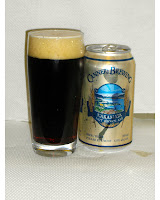 This pours a very dark brown with a thick brownish head. As the head settled, nice lacings formed on the side of the glass. I could smell the malts and a slight hint of coffee. It was weaker tasting than I had expected. It was rather watery for a 5.5% ale. There was a malt flavour to it, and hints of coffee from the roasted malts. The bitterness of the roasted malts are in the finish but so is a slight metallic taste.

Overall I did not enjoy this beer. 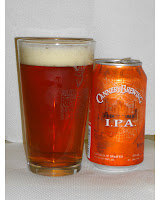 Oops! I forgot to rotate the glass for the picture.

There is hops to the nose right away with this one. I do have high hopes for it. The beer is a light amber, perhaps golden in colour. Lacing stay on the side of the glass as the head which does stay nicely, fades.

When I taste it, there is a hop presence but it's not overly powerful. This is a weak tasting IPA. In the finish comes that damn metal taste again. If the taste of metal in the mouth was not there, I think many might enjoy this brew. It was much weaker than I like in an IPA and I don't like the taste of metal.

The progression of the beers that was laid out by the company was correct. I just found that none of the three I had, I would try again. Due to that coppery metallic taste being present in all three beers, I definitely would not care to try any more of their brews.

Note: I tried them again on another day and found that same nasty coppery aftertaste. I would not try anything from this brewery again!
Posted by Swordsman at 19:16