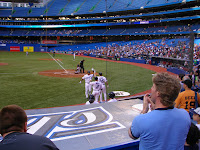 Tonight Ian and I went to see the Jays.

We had great seats, just 4 rows above the Blue Jays, thanks to a mutual friend, Mark, who gave us the tickets.

Because of the G20 in Toronto, security is tight. Fences and police/security are everywhere. The crowd was small likely because they were unsure as to how safe it would be. Because of the high police presence, I felt safe. Tomorrow would be a different story as that is when they expect the big protests to start.

The game was enjoyable, as the Jays scored 3 in the top of the first and never looked back. Brandon Morrow threw a great game and Vernon Wells crushed 2 home runs to lead the Jays to a 5 -0 victory.

When we left, we saw lots of police on patrol, shops being boarded up, and a very quiet downtown. Unusual but after a Jays game I actually had no problem getting a seat on the streetcar for the ride home.

All in all, a great night. Thanks for the tickets Mark.

I will be glad when this is all over. Ian and I both commented on how one can feel the tension in air. It feels like the proverbial calm before the storm. Hopefully it won't be as bad as everyone expects, but having review news of the summits before us, doubt it. The professional violent ones are about to make their appearance.

To all of you protecting our city in the rocky days ahead, thanks and be safe!

Already boarded up and a mile and a half away from the summit. 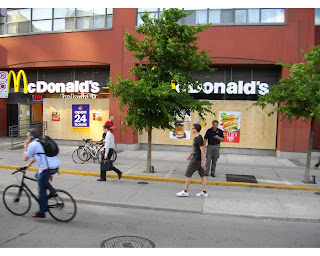 A store in the zone ... Euphoria does not look euphoric inside the zone. 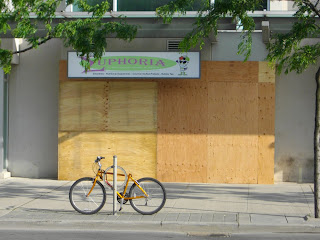 Police inside the fence, which fans were allowed to pass for the game. Cops everywhere and I was glad! 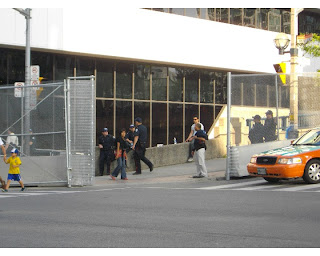 Ian caught Vernon Wells' second home run of the night in back-to-back at bats on video ... 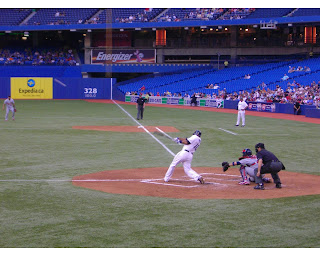 A rowdy drunk fan decides to take a swing at a cop. Excellent idea! 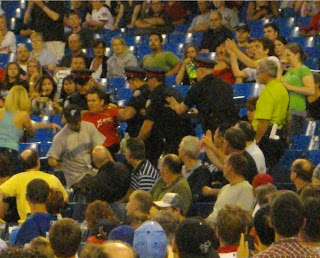 Boarding up the LCBO at Spadina and King. I think it is a great idea.

Toronto's finest being dropped off for night patrol. Thank-you! 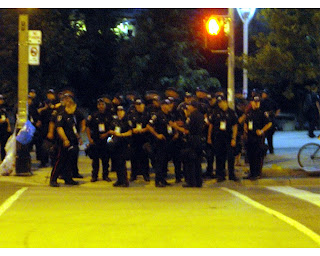 I know Italy lost, but really, am I considered a leper now?

Nice video of you being a Jays fan!