Beer of the Week - Denison's Weissbier 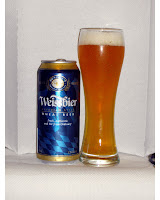 Thursday nights lately have been spent taking the "From Beer to There" course put on by Harbourfront and taught by Mirella Amato of Beerology.

This week is an off night for the course, our spring break, so I thought that I would do my beer of the week tonight instead.

During the course, Mirella has given me an appreciation of Wheat Beers, also known as Weissbier, Weizen or Hefeweizen, so I went out and picked up a couple of cans of Denison's Weissbier.

Denison's used to be a brewpub located on Victoria Street in the same building where Duggan's Brewpub now operates. It opened in 1989 and operated there until 2003. Since then it brews its beer out of Cool Beer Brewing Company in Etobicoke. Currently there are only two beers being brewed by Denison's, the Weissbier and a Dunkel.

This beer comes with a pedigree for in 2002 it was rated #1 in the world in the "German Hefeweizen" category on ratebeer.com and has remained in that place to this date. Excellent for a small Canadian brewery to constantly best the older German breweries. The category rating page is here.

You'll notice in the picture on the right the size of the head on the beer and the type of glass used. Although Hoegaarden is famous for their wide rimmed glass for its wheat beer, the proper glass to use is one shown with the Denison's logo. This type of glass will help to enhance the aromas and help to trap and keep the head. Keeping the head is important as the head protects the beer in the glass and keeps it fresh and flavourful.

I grabbed an appropriate glass, anxiously popped the tab and poured.

My pour had a decent head which disappeared fairly quickly, likely the result of using a glass I haven't used for a long while and not rinsing it well enough. The beer is straw coloured and, as it is an unfiltered beer, is cloudy. There is a spice in the aroma.

is a slight spiciness in the taste and a hint of banana. Interesting as according to their website "Although its only ingredients are malted barley, malted wheat, imported hops, water and yeast, the special Bavarian yeast produces the classic but unusual flavours of a true wheat beer. Flavour notes such as banana, clove and vanilla are all present."

This is a full flavoured, yet a light and refreshing beer. I enjoyed this very much.

This beer has only been available in the LCBO since November 2009. I'm glad it is out there as it is worth buying and I for one will be buying more.

Now I'm anxious to try their Dunkel.
Posted by Swordsman at 17:02