Beer of the Week - Brouczech Lager 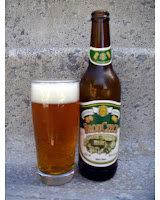 I enjoy pilsners but have always rather crapped on lagers. My opinion comes mainly from mainstream lagers that are put out by the big breweries. I find them very tasteless.

Lately I have enjoyed a few decent lagers and have decided to broaden my horizons. When I was at the beer store and saw a 6 pack of Brouczech Lager, there was no hesitation on picking it up. After all, Czechoslovakia then Bohemia invented the Pilsner, which is a style of lager and lagers reign supreme in Eastern Europe, so I am looking forward to this one.

Brouczech is made by Brewery Nova Paka, which is located in Nova Paka, Czech Republic. The brewery opened when in 1870 the town citizens created a "joint stock" company with the intention of opening a brewery. The first batch came out in 1872. It brewed continuously through 2 world wars and in 1948 was nationalized. Since

nationalization, the brewery was almost closed twice but survived. The whole original brewery has been preserved in its original condition and there have been no changes to its original appearance. From the pictures, it looks spectacular.

I was surprised that it poured a light amber coppery colour. I expected the golden colour of a pilsner, not something more ale like it colour. Obviously I have lots still to learn. The beer has a good head, one which settled a little but held. It does have the floral fragrance of hops in the aroma.

There is a pleasant bitterness when first sipped. It was a taste that I enjoyed. But the finish? I can't say I enjoyed t

he finish. There is something harsh in there that I did not like. Something bitter but not in a good way. Perhaps I have found a type of hop that I do not like. Thankfully, the finish is short and that taste leave.

It is because of the finish that I would not have this beer again. Hopefully I can find out what hops they use to see if it is the hops or something else in this beer which I dislike.
Posted by Swordsman at 15:34