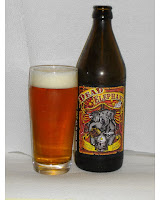 Odd name for a brew but when I saw it, I knew that I had to give it a try.

Dead Elephant Ale is made by Railway City Brewery located in St. Thomas, Ontario. Since 1856, a total of 26 railways have come through St. Thomas and earned the city the title of "Railway Capital of Canada" as it was an important railway junction. Thus the name of the brewery.

Railway City Brewery has been around just for a couple of years, opening early in 2008. They offer 4 regular beers plus a couple of seasonals. But why name a product Dead Elephant Ale?

The reason is the town became famous the world over on September 15, 1885, when the circus came to town. P.T. Barnum brought his circus to St. Thomas and it's biggest draw was J 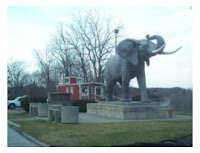 umbo the Elephant. Promoted as "Lord of Beasts", Jumbo was the largest elephant ever to be shown to the public and had been a star attraction for 15 years.

After the show, Jumbo was being led back to his private boxcar by his keeper, Scott. Meanwhile a train flagman left his post to get a better view of Jumbo. That fateful move cost Jumbo his life as an unscheduled train came into the yard unaware that a huge elephant was on the tracks. Scott got Jumbo to run, hoping to have Jumbo run between two boxcars but it was too late. 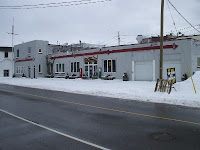 ost famous elephant, was struck and killed and the train that struck him was turned over and derailed. Jumbo's skeleton is now in the Museum of Natural History, where it has been seen by thousands and is still on display. The hide was reconstructed, stuffed and preserved by P.T. Barnum and can be seen at the Barnum Museum at Tufts College, Medford, MA. To view the entire fascinating story, click here.

Railway City's website promotes this as a "full bodied golden Pale Ale. This is a hop bomb, there is no doubt". I love hoppy beers and was anxious to give this a try as there are not many hop bombs available in bottles in Ontario.

The beer pours amber in colour with a good head that lasted . Nice lacings held onto the 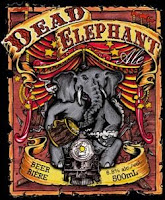 side of the glass with each sip. At 6.8% ABV, I thought there might be an alcohol taste but there is not. This ale hits with a pleasant bitterness, one which lasts through the finish. It is not a slap in your face hop bite that comes with American Hop bombs, as the hop bitterness is well balanced with the malt. Still the hp bite is there.

I would not call this a hop bomb but would call it an excellent hoppy beer. I am glad it is now being carried regularly by the LCBO but wish I had brought home more than just two when I bought them. I thoroughly enjoyed this ale and know that more will be making it's way to my fridge.
Posted by Swordsman at 16:01

This sounds like a good, hoppy beer! It is an unusual name for a beer. It is an interesting and sad story of how the name came to be.

Timing is perfect. I actually just picked up this beer over the weekend. Looks like others are hot on the trail :) I'm going to give it a try tonight!

Wow?! Who knew? That was really interesting!