Good friends of mine, Jim, my old fencing coach from Beaches Sabre Club, and his wife, Wendy, an excellent fencer who kicked my butt on a regular basis, decided to move to Fredericton, New Brunswick, to develop a Sabre fencing program there. Jim now coaches at Damocles Fencing Club.

Pictured below right is Jim, who coached the Canadian sabre contingent at the 2007 Commonwealth Veteran Fencing Championships in Toronto. Jim is at the right, flanked by George, myself and Zolton. Wendy is pictured below to the left at the 2009 New Brunswick Provincial Championships where she came home with a Silver medal.

Meanwhile I had discovered that there was a craft brewery located in Fredericton, Picaroons Brewing Company, and they had an ale they called Yippee IPA. I love IPAs, and love the name. You have to love a fun name like Yippee IPA! So a few months ago, I asked if they had room on their next trip back to visit if they would bring me a couple of bottles.

Just before Christmas I got a Facebook message from them, wanting a bunch of us to get 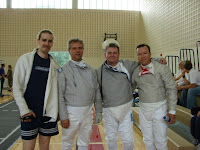 together and the happy news was "Gord, we brought beer!" It was so nice of them to remember.

I was surprised that the Yippee IPA comes in a 500 ML bottle. It also had a stronger alcohol content than I expected weighing in at 6.5% APV. Interesting to note that on the bottle and website it states "This beer may change from batch to batch as we explore the various interpretations of the style." Most companies strive for consistency. Picaroons plays with the recipe. Whether this is good or bad, I don't know but if it constantly is improving, then this is a good thing.

It poured a cloudy brown, suggesting that is unfiltered with some remaining yeast left in the bottle. Nothing on the website says that it is unfiltered or bottle conditioned but the cloudiness tells me that it was not filtered and this is definitely not a bad thing.

There is an instant of maltiness on the first sip and a hint of yeast, which was quickly overpowered by a dry hoppy bitterness. I can only describe it as a thicker tasting ale, which leaves with a long pleasant dry bitter finish.

I love IPAs and love this one.

Yippee for having friends willing to haul beer across three provinces for me, along with all their Christmas presents, clothes and, of course, fencing gear.