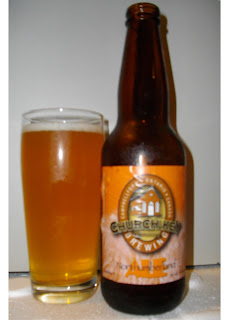 My sister, Judy, and her husband, Doug, live north of Belleville just outside the town of Madoc. About 20 minutes north of them live my folks, just north of the small town of Eldorado, home of Ontario's first gold mine. We went down the weekend before Christmas for a holiday visit.

For a few years when we go down to visit, I have always wanted to detour over to the town of Campbellford, which is about a half hour from Madoc. The reason for this? Church-Key Brewing Company.

Located in a refurbished 1878 Methodist Church, the brewery has been opened since 2000. The company has a good reputation in the beer community and I have always wanted to take a detour during my visits down to my family to drop in and sample some wares but so far have been unable to.

Judy and Doug, though, solved the sampling part of the problem by getting me some Church-Key Northumberland Ale for Christmas. This is the only Church-Key product available at the LCBO and only the ones local to the area.

The Church-Key owner, John Graham, was interviewed on Great Canadian Pubs and Beer and it turns out he used to run a "brew your own" place in Aurora. I have likely brewed beer at his place when I lived there. He then worked as a brewer for Amsterdam Brewery in Toronto, before going out on his own.

The Northumberland Ale was the first beer he turned out. It is a "stock ale" that was designed "to be a throwback to tavern ales of the 40s and 50s". I wasn't around then so cannot comment on how close he got. 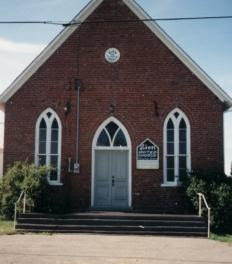 I noticed when I opened it that it poured with a cloudy strawish colour and a nice head. The ale had a good head and left the desirable lacing's on the side of the glass.

It has a nice smooth taste to it, starting malty and finishing with a slight sourness. It is a light tasting refreshing brew, one that would be an excellent session ale.

Now that I know this is available in the local county LCBOs, we will be making a stop to get some more whenever we are down.

After tasting this beer, I also am more determined than ever to drop into the brewery and try some of their other brew.

Thanks Judy! Thanks Doug! Great choice for a gift!
Posted by Swordsman at 15:14