I had never had a pumpkin ale before and figured this was the year to give it a try. So I headed down to the LCBO for a large 650 ml bottle of Great Lakes Pumpkin Ale.

Located in Toronto's west end, this is the third year the brewery has been making this seasonal. Last year it was so popular that it sold out before Thanksgiving. This year they are brewing more.

Keeping it very local, the brewery uses pumpkins specially grown in the summer to be ready for early fall brewing by a farm in Aylmer, Ontario. They add the pumpkin directly into the brew along with specialty malts, hops, cinnamon, clove, nutmeg and allspice. 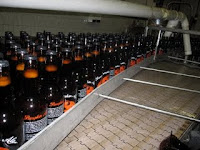 The beer pours with a slight orangy tinge to the colour. The aroma of nutmeg is very apparent.

I admit I was apprehensive in trying this, which likely is why I waited three years, but I enjoyed the taste. The pumpkin flavour is there along with the flavouring of the spices. These do not overpower the taste of the beer but compliments it.

This was an ale which I would have again and has made we want to go out and try others.
Posted by Swordsman at 15:20