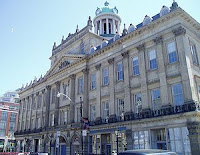 Before the play started, the characters were all very interactive mingling with the audience throughout the hall. It was fun watching them trying to figure out the technology from the 21st century. Pictured right is Laura Secord cautiously having her picture taken.

I knew I would enjoy it as the war of 1812 is a subject that I have a heavy interest in. I was glad that Teena enjoyed it too. Her write up is here.

"The 1812 Great Canadian Victory Party will bring the War of 1812 and the Farmers Rebellion to life as you become an honoured guest at a celebration featuring Laura Secord, Fitzgibbon, Tecumseh and other Canadian heroes.

This theatre performance is a lighthearted dramatization of the events that put Canada on the path to nationhood, starting in 1812 and ending in 1834 when Toronto was incorporated as a city. The performance will be held in St. Lawrence Hall, built in 1849 and was the social centre of Toronto for more than a century.

As part of this unique production, a tasting of authentic fare served during this era fruit preserves, cheese and heritage bread will be featured. The food will be prepared by students enrolled in George Brown Chef School (Canadian Food History a Toronto Museum Experience course), who will use recipes and cooking methods from the 1800s."

The various characters gave speeches of their part in the war. I especially enjoyed Laura Secord's speech, where she read from a letter which was prepared by James FitzGibbon. I have read that letter so found her rendition very enjoyable.

It was a very well-played production which started as a party celebrating the British victory in the war, then advanced to the 1837 farmers revolt in Toronto.

I enjoy live theatre and local history and last night brought both together for me. It was another great night out with Teena!

Here's a copy of the original letter which FitzGibbon wrote in praise of Laura Secord's heroic effort. 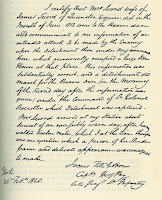 The room was beautiful. Here are the characters making their speeches.

Me and the ladies

Labels: Events, Live Theater, Things to do in Toronto