CASK! Challenge at C'est What 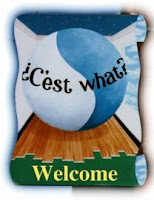 Last night, a friend and myself went to the CASK! challenge at C'est What. I must say it was a very enjoyable night and very affordable at $15 a head.

We sampled 5 different ales, one cask and one keg-style for each ale. The five that we sampled in order were Granite Best Bitter, McLean’s Pale Ale, Black Oak Pale Ale, Wellington County Ale and ending with C’est What Coffee Porter.

There were representatives from three of the breweries there to talk about the differences between beer from a cask and a keg.

Brewmaster Charles McLean was there, bringing along his nearly 30 years of cask brewing experience and his McLean’s Pale Ale. He was joined by Ken Wood, owner of Black Oak Brewery, which is now getting set up in a new location in Etobicoke, and Bruce Halstead from County Durham Brewery in Pickering.

Between rounds I also had a chance to talk to Ken Wood, whom I found friendly, easy to talk to and quite enthusiastic about his new brewery which is going to allow him to experiment with new recipes and seasonal beer. I look forward to visiting his new brewery once opened.

I learned a fair bit about cask beer and why it has a fuller, better balanced taste. Keg beer is filtered and pasteurized killing the yeast, which in turn stops the conditioning or development of the beer. Keg beer also goes through a chill-proofing, which will stabilize or kill protein compounds in the beer. This can remove or lessen some of the background flavors in a beer such as malt, which will give keg beer less complexity and smoothness and more of the bitter bite from the hops. As I like a bitter bite to my beer, I found that in some cases I enjoyed the keg-style to the cask-style. It is then injected with CO2 to preserve and carbonate the beer.

Cask conditioning keeps the yeast cultures alive which continues to react with the ingredients which in turn continues to mature the beer and creates a natural carbonation.

My top 3 of the night were:

There were no losers. In head-to-head between cask and beer for each brand, my score was 3-2 for cask over keg.

It was a great evening, learning and sampling, sampling and learning!
Posted by Swordsman at 13:09