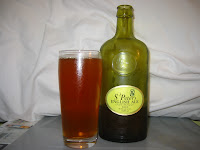 I admit I have been lucky. Since starting the beer of the week, I have found that I have enjoyed every selection that I have made. I have tried beers and ales that I had no knowledge of and have been pleasantly surprised.

This week is no exception.

I have been wanting to try the St Peters English Ale, if for no other reason that it is an English Ale and sold in a unique old style oval green bottle. Not great reasons to choose a beer, I admit, but last week I chose one because it had a cork and that one worked out. This bottle is a replica of one produced for a brewery outside of Philadelphia (this year's World Series Champions) circa 1770 for an innkeeper with an inn on the Delaware River.

I am curious about this. St Peters Brewery has been around since 1996. It is an English brewery located in Suffolk, England. At first I thought the bottle was produced only for import to North America, thus the connection with the bottle. But no, this is the same design of bottle they use for everyday distribution.

The one difference they use for export to the North American marketplace is the name. They sell it here as St. Peter's English Ale, with the word organic in a smaller font under the title. In England, it is distributed as St. Peter's Organic Ale. I guess they surmise we are not into organic natural products or are better sold when the world "English" is in the name of the product.

According to their website: "Water is extracted from our own 300’ deep borehole and combined with Soil Association accredited light malted barley from Norfolk. Organic hops provide the distinctive palate. The yeast used is St. Peter’s own single strand variety. The result is a delicate, clean, crisp, lightly carbonated, traditional English Ale with a full ‘citrus hop’ aftertaste. This lovely beer won the Soil Association’s top prize in 2002 and a silver medal in 2006."

I truly do not know what the Soil Association does in the world but it does seem to like this ale.

It is crisp and fresh and has a terrific hoppy bitterness to it. Not too much but enough to add to a refreshing clean taste. It finishes well with a slight lingering bitter taste of the hops staying behind.

They also produce a bitter which I am anxious to try.

Once again, I have success. I do know there must be a week coming up where my beer of the week choice leaves me summoning up my courage to down that second bottle.

For now, I can only enjoy the great choices that I have made and pray for more of the same in the weeks to come.
Posted by Swordsman at 21:03

The bottle is lovely and old looking. I wouldn't want to throw it away when I had drank the ale. I buy most of ales online from sites such as Majestic Wine. It saves a lot of hassle and I can get a good selection of ales delivered right to my door.