Last night there was an anniversary party thrown at the Victory Cafe to celebrate 10 years of The Bar Towel's existence on the Internet. The site is run by Cass Enright and followed by many.

Many in attendance knew each other but those of us who came in as strangers left having made some friends. I was not standing long, with my first pint of County Durham Cask Conditioned Ale, when I was greeted by Doug who I spent some time chatting with. We were soon joined by others and talked about Cass's website, beer in Canada, the election, beer in the U.S., lurkers (good or evil) and beer around the world.

The County Durham Cask Conditioned Ale was a flavorful strong tasting beer with a nice hoppy bitterness to it. It tasted good enough to have a second. For my third, I switched to a pale ale by another brewer. After the strong taste of the cask ale, this tasted weaker and I won't mention the company as it didn't stand a chance having to follow such a strong tasting beer before. I would like to try it again but as my first beer. I finished with a pint of another Durham County beer, the Hop Addict, a full flavoured beer with a delicious bite and finish.

Some nights when I come home after a few pints of big brewery beer, having visited a lesser pub without knowledge of quality brews, my mouth can taste sludgy or pasty. Not last night! The fresh hoppy finish of the Hop Addict accompanied me for the trip home. 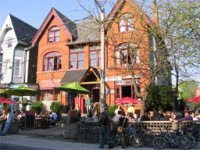 I met Cass's father by the taps while ordering a pint and found him a big friendly, easy-to-talk-to fellow. A few minutes later, I met Cass. He is hard to miss in a room as he towers above most. He was warm, friendly, very outgoing and seemed to know most in the room. If he didn't know someone, he made an effort to come over and introduce himself as he did with me. We chatted for a few minutes and he seems like a nice guy.

Also I enjoyed meeting Steve Beaumont, who is a writer and has had articles on beer, spirits, food and travel published in many magazines and newspapers. He also is the author of five books and has his own website, the World of Beer.

Troy was there from Great Canadian Pubs and Beer and I sat with him for awhile.

It was a good night, very enjoyable. The people, place and pints were all good. An excellent way to spend a Tuesday evening.

Best of luck, Cass, and I wish you another 10 successful years!
Posted by Swordsman at 10:45