Beer of the Week- Adnams Broadside 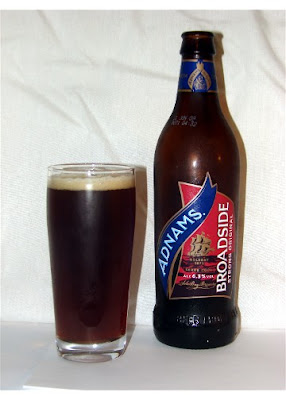 6.3% Alcohol/Vol.
Made in: England, United Kingdom

This week I read an article in the Toronto Star about an English beer called Adnams Broadside. Yes the name Adnams is spelled correctly!

The brewery was founded in 1872 in Southwold, England. Off their coast in 1672, a naval battle that took place where the English and French joined forces to fight the Dutch in what is called the Battle of Sole Bay.

75 Dutch ships attempted to surprise and defeat the combined the 95 ships of the British and French forces in Southwold Harbour.

The ships in harbour managed to escape entrapment and meet the enemy. The battle was hard fought to a draw with heavy losses on both sides

What does this have to do with beer? According to there website this beer was brewed to celebrate that famous battle. The label has a picture of the type of vessel used in this battle, with Southwold 1672 underneath. Broadside is a naval term used of the time when a fighting ship would bring all it's guns on one side of the ship, to fire at once at the enemy for a crippling blow. 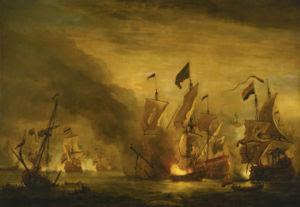 No crippling blow to this beer. At 6.3% alcohol, I expected a dark, thick tasting, very bitter beer, but was quite pleasantly surprised. This is a strong flavorful beer which has a pleasant slight bitterness to it. Some beers have flavor that disappears but this one stays with you in a delightful way.

If ever I am in England again, I hope to visit this brewery and try a pint of their Bitter and Blonde at a neighborhood pub in Southwold. This is very much a beer to my liking.