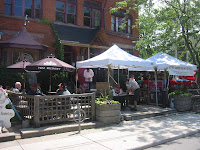 Yesterday I was at the Victory Cafe for the Summer Cask Festival anxious to try some fresh Cask Ale.

Cask conditioned ale is beer that is brewed from traditional ingredients and matured in the cask from which it is served. This means that it is fresh and unfiltered and therefore has a unique flavour.
Cask ale is naturally conditioned as a by-product of the 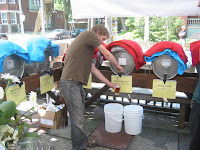 secondary fermentation that takes place inside the cask, It is then served directly, without the use of extraneous carbon dioxide or chemical treatments of any sort.

There were 10 different type of Cask Ales available and I will say that you did get some bang for your buck. $10 gave you the choice of a huge sandwich, (roast beef, pulled pork or veggie with fries) a 10 oz souvenir glass and two beer tickets to fill the glass. It was $2.50 each for additional tickets. 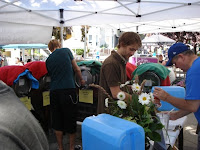 The staff were friendly and very helpful.

What about the beer?? Wow! They were all excellent. The aroma from your beer tells you this is no subtle brew. The flavors from the beer greet your nose and makes you anxious to take that first sip.

I was ready to tip the glass. 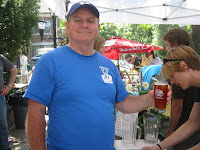 The taste is wonderful, full and deep. The IPA's have a sharp bitterness to them but are refreshing at the same time. Of the six that I tried (two were not ready and we did have to leave before I tried the two remaining casks) 2 were IPA's, 2 were English Pale Ales, 1 was an Amber and the other was a brown Ale.

The Triple X surprised me as it did not have the typical IPA bitter bite but a fresh fruity taste. Very refreshing for a hot afternoon. The Plowmans Ale had a citrus taste that was refreshing but was 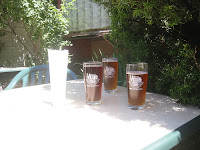 I really enjoyed the Hop Bomb IPA, The Macleans Pale Ale, the Stonehammer Dark Ale and the Signature Ale which I started the day with. The winner? Anyone who came in for a taste of what is know as "Real Ale"

I am sold on the Cask Ale taste and look forward to the next festival. Next time I will stay longer.

Click here for more pictures of the event from Cask! Toronto.
Posted by Swordsman at 19:37