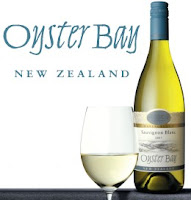 The first time I had Oyster Bay sauvignon blanc was at the Bungalow Cafe last winter.

It was their opening night, which was in the middle of a snow storm. We were their first customers ever and we ordered a bottle of Oyster Bay sauvignon blanc ... and then another because we liked it so much.

We've been back to the Bungalow many times and it remains my wine of choice there.

We went to the Bungalow in July during Bungalicious to celebrate our fifth wedding anniversary. Rob, the owner, gave us a bottle of Oyster Bay sauvignon blanc. Wasn't that nice?

Gord picked up a bottle of Oyster Bay sauvignon blanc for supper tonight. It's the first time we've had it at home ... and it probably won't be the last.
Posted by Teena in Toronto at 18:27