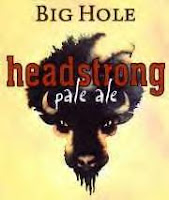 The other day I was in the LCBO (liquor store in Ontario) and saw this interesting beer on the shelf. Now that we have this blog, I want to sample a new type of drink every week. It is a big commitment and duty but I do feel up to the task, and decided to give it a try. Knowing that I could not give a proper evaluation with just one can, I bought two.

Originally I purchased Headstrong Pale Ale, as on the top of the can it announced that it is a "Classic British-Style Pale Ale". I was surprised then when I discovered that it is not a British beer but an American brewed by Big Hole Brewery in Montana. Surprised because when I think of American beer I always think of their big brand generic tasting beers, and forget they also have small independent breweries. Also surprised, as in my ignorance I thought that Pale Ales would obviously be brewed only in Britain or Canada.

Over the past couple of years I have come to enjoy the bitter full flavor of an India Pale Ale (IPA). This was no exception. Headstrong Pale Ale is a heavier tasting but crisp beer with a very nice bitterness to it. It comes in at 5.5% alcohol.

This is a very nice tasting beer, one which I would purchase again.

In fact, instead of rating beers by number, I am going to have three ratings. The top rating for a beer will be, that I liked it and would buy it again. The middle rating is, I am glad I tried it, enjoyed it, would not buy it again. The last will have many descriptions and you will not need a number scale to know I did not enjoy the experience.

I would have put the Breweries URL in this report, but their website is not yet built. Guess they are too busy brewing fine beer.
Posted by Swordsman at 20:03

I wasn't a fan of this beer. Gimme a Keith's any day!

Thanks for the blogoversary greeting on my blog. Wow, I just took a look at your blog - it's so cool! Marc is a huge fan of Canadian beers. I'm not at all into beer (I like white wines, especially rieslings), but we both absolutely love Canadian ice wine. We fell in love with them when we visited the Niagara region of Ontario two years ago. Crown Bench is our favorite. We plan on going back there within the next year or so.