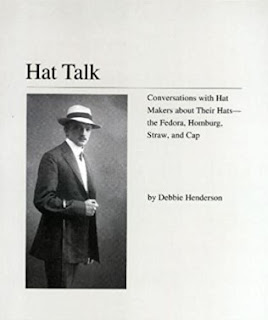 According to my parents, I have been wearing a hat since I was three years old. They bought me a straw hat which I clamped onto my head and never took off. I've been wearing a hat ever since. So, when I saw Hat Talk by American author, Debbie Henderson, in BeauChapeau Hat Shop in Niagara on the Lake, I just had to have it. Never walked out of there with a book instead of a new hat before.

Subtitled "Conversations with Hat Makers about their hats -- the Fedora, Homburg, Straw and Cap", the author delves into the history of hats through the very personal visions of those who lived hats all their lives. This focus enables her to examine how of some of the best known hat companies founded and maintained their activities, their fashion leadership and their national and international commercial roles.
It's an interesting read about the the hat industry in North America, from the very early days of hat making and felt processing, to modern times.
The book describes how the decline of the hat followed the popularity of the automobile. When people ask me why I wear a hat, I always answer by saying it's to keep the weather off my head. Turns out, that was the reason men and women did back then, but when the car came along and more and more people were driving, the car's roof protected them instead.
I was surprised by how the film, Urban Cowboy, from the 80's popularized the wearing of hats. Production of hats ramped up causing some companies to flourish, some to prolong their lives and brought others into bankruptcy.
For anyone who enjoys wearing a hat, this is an excellent book to read.
Posted by Swordsman at 17:09