Velvet Was the Night by Silvia Moreno-Garcia 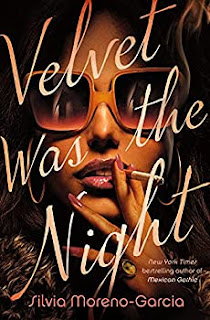 I just finished reading Velvet Was the Night by Silvia Moreno-Garcia.
Mexico in the 1970s is a dangerous country, even for Maite, a secretary who spends her life seeking the romance found in cheap comic books and ignoring the activists protesting around the city. When her next-door neighbor, the beautiful art student Leonora, disappears under suspicious circumstances, Maite finds herself searching for the missing woman—and journeying deeper into Leonora’s secret life of student radicals and dissidents.
Mexico in the 1970s is a politically fraught land, even for Elvis, a goon with a passion for rock ’n’ roll who knows more about kidney-smashing than intrigue. When Elvis is assigned to find Leonora, he begins a blood-soaked search for the woman—and his soul.
Swirling in parallel trajectories, Maite and Elvis attempt to discover the truth behind Leonora’s disappearance, encountering hitmen, government agents, and Russian spies. Because Mexico in the 1970s is a noir where life is cheap and the price of truth is high.
This was an entertaining read. I enjoyed how the story was told from the view of two different characters. Maite is a reluctant hero who finds herself in a situation way over her head. All she really wants is for her neighbour, Leonora to return and pay her what she is owed for looking after her cat. Who knew, that just by saying yes to cat sitting, her life would be in danger.
One other thing I liked. All the way through the book, two of the characters would be putting on records or playing the jukebox. As the story is based in the 70s, I knew many of the songs, but some were covers done by Mexican artists. There were some Spanish rock bands. Many times as I was reading I thought it would be fun to play some of the songs. A nice surprise is at the end of the book, the songs and artists are listed. I will be having a listen.
I wouldn't hesitate to buy another of Moreno-Garcia's novels.
About Silvia Moreno-Garcia 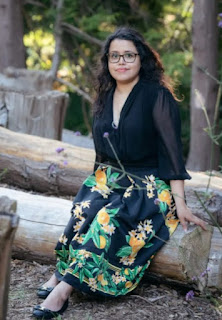 Mexican by birth, Canadian by inclination. Silvia Moreno-Garcia is the author of a number of critically acclaimed novels, including Gods of Jade and Shadow (Sunburst Award for Excellence in Canadian Literature of the Fantastic, Ignyte Award), Mexican Gothic (Locus Award, British Fantasy Award, Pacific Northwest Book Award, Aurora Award, Goodreads Award), and Velvet Was the Night (finalist for the Los Angeles Times Book Prize).
She has edited several anthologies, including She Walks in Shadows (World Fantasy Award winner, published in the USA as Cthulhu’s Daughters). Silvia is the publisher of Innsmouth Free Press. Her fiction has appeared in numerous magazines and anthologies.
She has an MA in Science and Technology Studies from the University of British Columbia. Her thesis can be read online and is titled “Magna Mater: Women and Eugenic Thought in the Work of H.P. Lovecraft.” She lives in Vancouver, British Columbia.
Posted by Swordsman at 17:49