The Women of Troy by Pat Barker 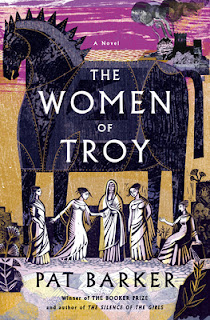 I have found over the years of going to the theater that I really enjoy Greek tragedies. Not sure what there is about them but I find them enthralling. Recently I was in Type Books on Queen and saw The Women of Troy on the shelf. As I love the stories told on the stage, why not try a novel?

Troy has fallen. The Greeks have won their bitter war. They can return home as victors - all they need is a good wind to lift their sails. But the wind has vanished, the seas becalmed by vengeful gods, and so the warriors remain in limbo - camped in the shadow of the city they destroyed, kept company by the women they stole from it.

The women of Troy.
Helen - poor Helen. All that beauty, all that grace - and she was just a mouldy old bone for feral dogs to fight over. Cassandra, who has learned not to be too attached to her own prophecies. They have only ever been believed when she can get a man to deliver them. Stubborn Amina, with her gaze still fixed on the ruined towers of Troy, determined to avenge the slaughter of her king. Hecuba, howling and clawing her cheeks on the silent shore, as if she could make her cries heard in the gloomy halls of Hades. As if she could wake the dead.
And Briseis, carrying her future in her womb: the unborn child of the dead hero Achilles. Once again caught up in the disputes of violent men. Once again faced with the chance to shape history.
The author, Pat Barker, pervious winner of the Guardian Fiction Prize and the most coveted Booker, awarded each year for the best novel written in English and published in the United Kingdom or Ireland and the style of writing in this novel shows why.
I really became caught up in the story which takes place after the fall of Troy by Greek soldiers hiding inside the fabled Trojan horse. Where usually stories from this mythical period are told from the male point of view, this one is told first person, through the eyes of Briseis, the former Trojan queen who was the slave of Achilles Greek hero of the Trojan war before his death.
The point of view was interesting, as was the story. I thoroughly enjoyed it.
Posted by Swordsman at 09:57