Orphans of the Czar at Crowsnest Theater 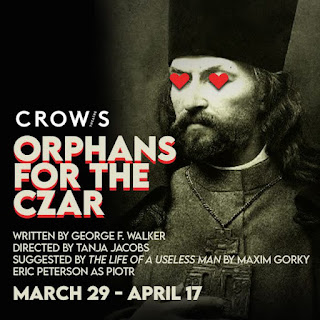 Today I journeyed to the east end of the city to see Orphans of the Czar, at Crowsnest Theater. It's the first play I've been to since October, 2019 when I saw A Streetcar Named Desire. Of course, the pandemic was the reason for my not seeing a play in two and a half years.
George F. Walker’s newest high-stakes comedy, ruefully exposes the duplicity, revenge, and self-interest at the core of a culture about to go up in flames. Suggested by the novel The Life of a Useless Man by Maxim Gorky and set shortly before Bloody Sunday in St. Petersburg, a hapless double agent tries to stay on the right side of both the revolutionaries and the czarists.
The orphaned fool Vasley, leaves his impoverished village to work in his uncle’s bookstore in the city. He becomes engrossed by the women, the intelligentsia, the spies, and all their conflicting ideologies. A comedy of pathos about the fragility of people in unstable times.
I really enjoyed this production. It was funny, sad and in part, exciting. Eric Peterson played two roles in the production. Half brothers or maybe cousins, an ongoing joke in the play. Of course Peterson did a bang up job. All the roles were well acted with Christopher Allen, who played Yakov, being a standout.
Today was supposed to be the last day of the play but has been extended to April 24th. I definitely can see why. 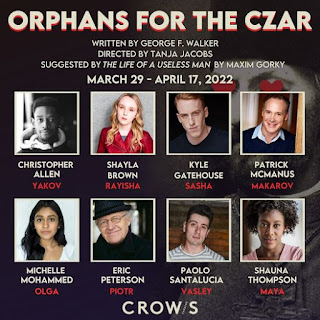