Stolen Focus: Why You Can't Pay Attention- and How to Think Deeply Again by Johann Hari 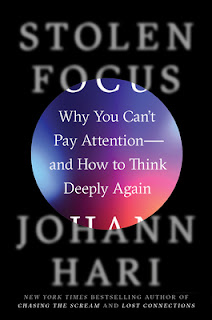 In the United States, teenagers can focus on one task for only sixty-five seconds at a time, and office workers average only three minutes. Like so many of us, Johann Hari was finding that constantly switching from device to device and tab to tab was a diminishing and depressing way to live. He tried all sorts of self-help solutions--even abandoning his phone for three months--but nothing seemed to work. So Hari went on an epic journey across the world to interview the leading experts on human attention--and he discovered that everything we think we know about this crisis is wrong.

We think our inability to focus is a personal failure to exert enough willpower over our devices. The truth is even more disturbing: our focus has been stolen by powerful external forces that have left us uniquely vulnerable to corporations determined to raid our attention for profit. Hari found that there are twelve deep causes of this crisis, from the decline of mind-wandering to rising pollution, all of which have robbed some of our attention. In Stolen Focus, he introduces readers to Silicon Valley dissidents who learned to hack human attention, and veterinarians who diagnose dogs with ADHD. He explores a favela in Rio de Janeiro where everyone lost their attention in a particularly surreal way, and an office in New Zealand that discovered a remarkable technique to restore workers' productivity.

Crucially, Hari learned how we can reclaim our focus--as individuals, and as a society--if we are determined to fight for it. Stolen Focus will transform the debate about attention and finally show us how to get it back.
Posted by Swordsman at 10:24