Too Much and Never Enough: How My Family Created the World's Most Dangerous Man by Mary L. Trump 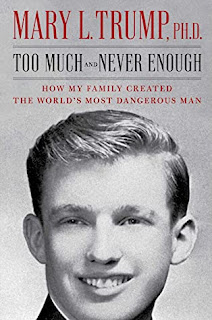 With everything which is going on down in the U.S. lately, I decided that Too Much and Never Enough by May Trump, Donald Trumps niece would be an insightful read. It was.
In this revelatory, authoritative portrait of Donald J. Trump and the toxic family that made him, Mary L. Trump, a trained clinical psychologist and Donald’s only niece, shines a bright light on the dark history of their family in order to explain how her uncle became the man who now threatens the world’s health, economic security, and social fabric.
Mary Trump spent much of her childhood in her grandparents’ large, imposing house in the heart of Queens, where Donald and his four siblings grew up. She describes a nightmare of traumas, destructive relationships, and a tragic combination of neglect and abuse. She explains how specific events and general family patterns created the damaged man who currently occupies the Oval Office, including the strange and harmful relationship between Fred Trump and his two oldest sons, Fred Jr. and Donald.
Some people may look at this book as a spiteful, revenge piece written by a person who was effectively defrauded of tens of millions of dollars and whose father was always treated as a failure. No. They'd be wrong.
Mary Trump wrote a very effective look into the Trump family and empire. The traits Donald displayed as a child, in his teens and later, in his real estate career are consistent with what we see in him today. They are also consistent with personality traits of Donald's father Fred and the way he raised the children and treated his wife.
Mary's father, Fred, was the first born of Mary's grandparents and named after his father, who I guess would be Fred Senior. The fact that the younger Fred would spend a lifetime seeking approval, praise and support, even love from the elder Fred and was never given any of it, made me wonder why he never just said 'to hell with it' and be happy with his own life and accomplishments. From what I read, the younger Fred had many.
The Trump family idea of happiness and success appear to be built strictly on premise that the amount of wealth a person has and not what they give to the world, is the only measurement. Those who don't have it, are not worthy. Why people, after the past for years, still want to vote for this vile man, after all the ill he has wrought over the past 4 years, I'll never know.
That of course gives you the preconceived view this reviewer had before he had ever turned a page.
Posted by Swordsman at 17:03