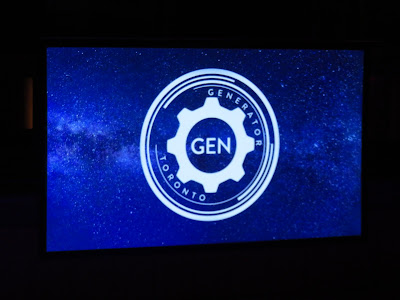 Tonight I went to see Chris Hadfield's Generator. This is the 4th year for it. 2018 was the first time I went but had to miss it last year. Damn! Made sure I didn't miss it this year as I bought my ticket in October.

Probably the best thing to happen to a Canadian winter since they invented the crazy carpet.

Generator remains the only show in Toronto where you can find robotic exoskeletons, stand up comedians, cyborgs, wunderkind, astronauts, musicians, celebrities, and spoken word artists seamlessly blended onto the same stage. It's unique. Let's face it, it's weird. But we love it, the audience loves it, and we can't wait to show you what we have in store this year.

Bring your friends! Bring your enemies! Bring whatever pets Roy Thomson Hall allows! Generator is back, and better than ever. 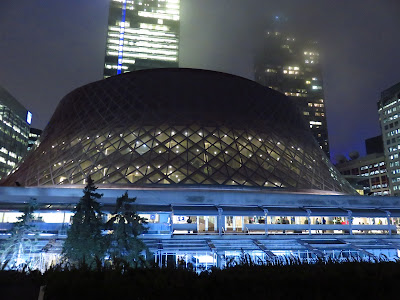 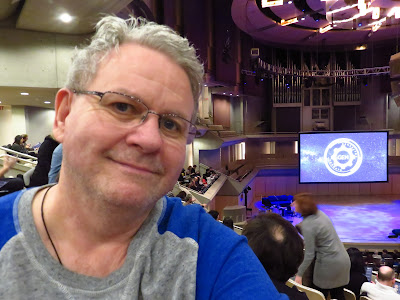 So many people took the stage in the 3 hour show. What is unexpected is how comical scientists can be when talking about their fields. I laughed most of the night, while I learned fascinating facts and discoveries.

First up was the costumed band TWRP. 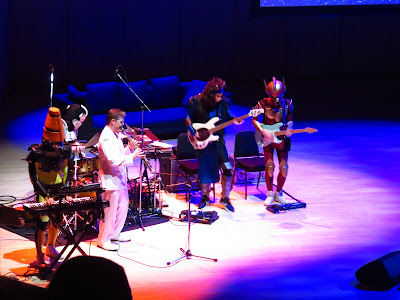 Robin Ince, a British comedian was the emcee for the night and was hilarious. 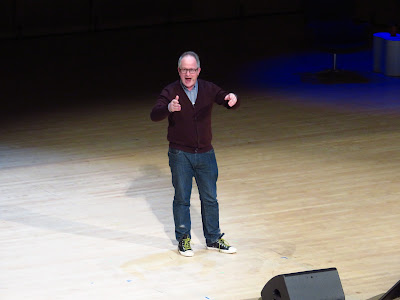 Brendan Frey was up first.  He spoke about how he and his team developed an artificial intelligence  (AI) to search for searching for the detection and possible treatment of genetic diseases and the teams successes. 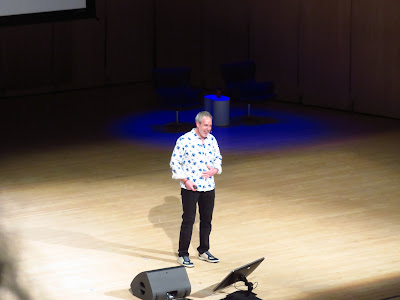 I found it wonderful how Jae Rhim Lee and Shari Forbes could discuss death in such a meaningful and humorous way. Lee started talking about her admiration of sloths and worked it into the development of an eco-friendly mushroom burial suit and how much better it is for the world. Hey, not so far fetched. Actor Luke Perry was buried in one!

Forbes is the Research Chair in Forensic Thanatology and the Director of the Secure Site for Research in Thanatology. So what is that? She runs a body farm, Canada's first. What is a body farm? People donate their bodies so when they die, they are buried on this farm. Forensic scientist then can learn about decomposition of a body in the earth and to train dogs to search for bodies through their scent. Wow! 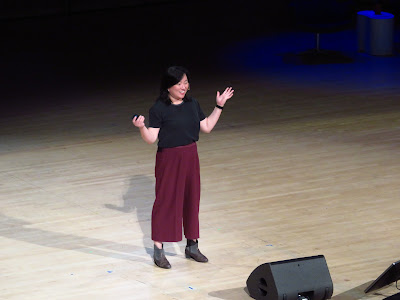 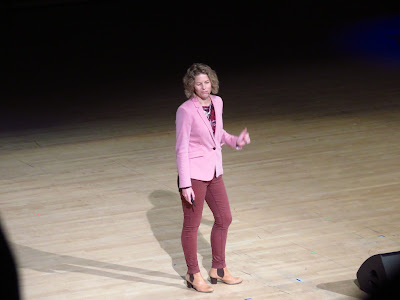 Second City was there showcase a little of their new She the People show. 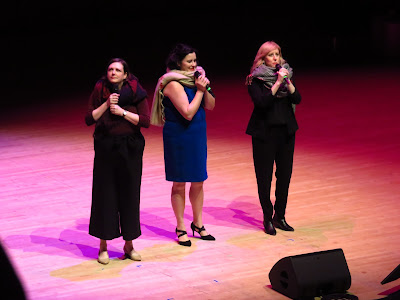 That was a lot of show, and that was just the first half. After intermission, astronaut and man of many talents, Chis Hadfield, came out and with TWRP did a great job with House of the Rising Sun, After he spoke about the history of maps. He was funny and I learned a lot. 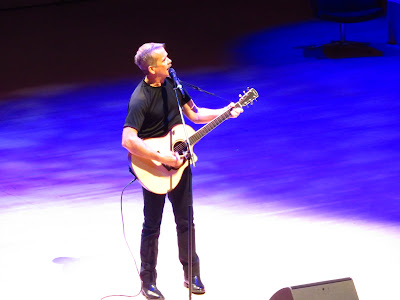 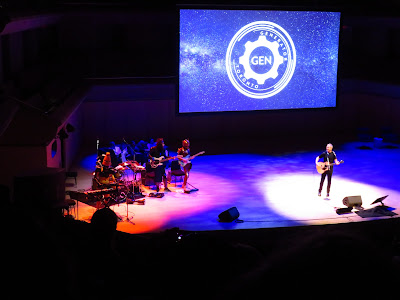 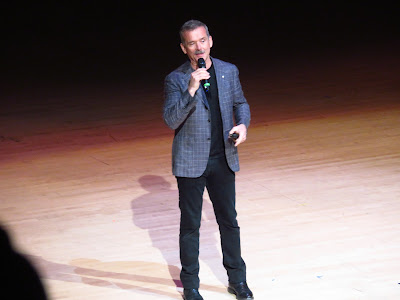 Never before had I heard of "Math Comedy". Well. Matt Parker is a Math stand-up from Australia and performs his full act around the world. He was so funny that I'll be heading out to buy his new book, When Math Goes Wrong in the Real World. Tonight he spoke about a 1970s British court case(s) where MacDonald's was taken to court over their claim their 8 item menu had 40,312 combinations. I couldn't stop laughing! 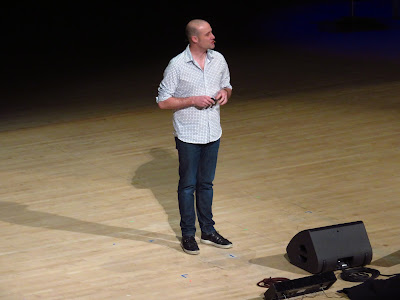 This was amazing. Adrian Owen, from a Professor at The Brain and Mind Institute, Western University in London Ontario, spoke about he and his team discovered how to determine in a person hospitalized in a vegetative state, not only has brain function, and is aware and thinking. Around 20% of those in this state, have that possibility.

He also found a way to communicate with them through yes and no questions. He put up a quote from a patient who awoke years after, which I can't find on-line. It said how the person felt now she was being communicated with and how she was knew she was now, even in that condition, being treated as a person, rather than an object. He won the order of the British Empire for his work. 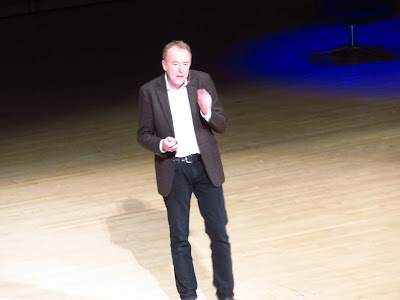 Aaron Chen, a stand-up from Australia, did a great 10 minute set. 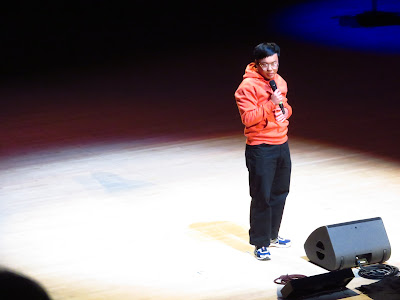 Finally, Simone Giertz, who had a U tube video show, Shitty Robots, showed a few of her videos, talked about her creation, Truckla, a Tesla she turned into an electric pickup truck. Then, while she built paper airplanes in a contest with Chris Hadfield, she spoke about her ordeal with the discovery of a brain tumour. That she was funny while talking about it was amazing. 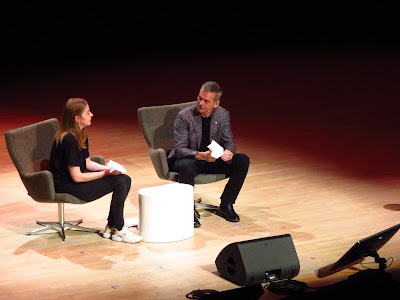 After a fast 3 hours, the show was over. I got more than my money's worth for sure. I may have missed last year's show, but won't miss the next one. 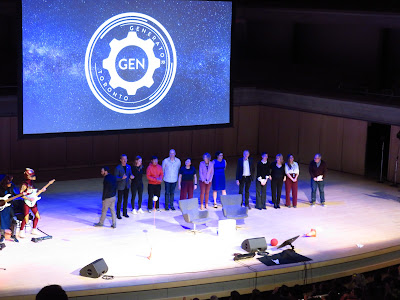