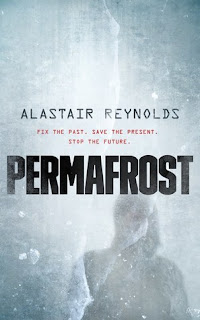 2080: at a remote site on the edge of the Arctic Circle, a group of scientists, engineers and physicians gather to gamble humanity’s future on one last-ditch experiment. Their goal: to make a tiny alteration to the past, averting a global catastrophe while at the same time leaving recorded history intact. To make the experiment work, they just need one last recruit: an ageing schoolteacher whose late mother was the foremost expert on the mathematics of paradox.

2028: a young woman goes into surgery for routine brain surgery. In the days following her operation, she begins to hear another voice in her head... an unwanted presence which seems to have a will, and a purpose, all of its own – one that will disrupt her life entirely. The only choice left to her is a simple one.

Does she resist... or become a collaborator?

At 192 pages, this is more a novella than a novel, it is, however, a fast paced, well thought out Sci-Fi thriller.

The future world of 2080 is more than bleak. The earth's residents know they are the last generation. Valentina Lidova is the ageing school, somewhere in her seventies, recruited as the best possible candidate to go into the past to find seeds genetically modified so they could grow anywhere in any situation. As it says above, there will be changes to the past, hopefully insignificant, so the time line is only nudged, not severely altered.

It was an enjoyable ride and book I had a hard time putting down.
Posted by Swordsman at 15:42