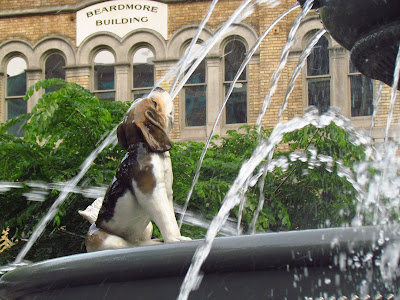 This evening, Teena and I enjoyed an Architectural Photography Tour for its members put on by Heritage Toronto.

See the city through fresh eyes as we focus our discussion on how composition and light can help you get the best building shots for your personal portfolio or Instagram page. Please bring a camera (DSLR or phone) that you are comfortable using.

So what does Heritage Toronto do?

We celebrate and commemorate our city’s rich heritage and the diverse stories of its people, places, and events – both to make sense of our present and to inform the future. Our Vision To be the recognized voice of Toronto’s heritage stories.

We met at the new fountain at Berzcy Park. It's a fabulous fountain opened in 2018 and was nominated in the 2018 Heritage Awards. 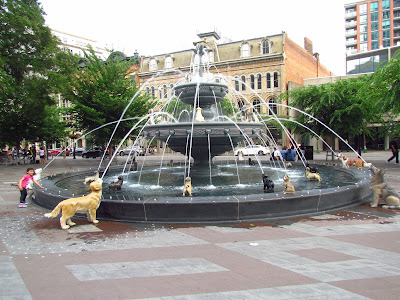 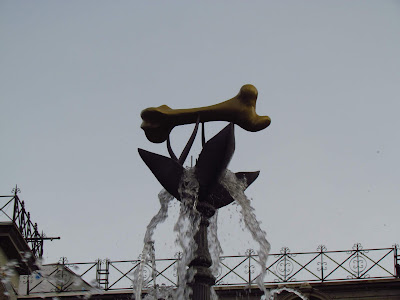 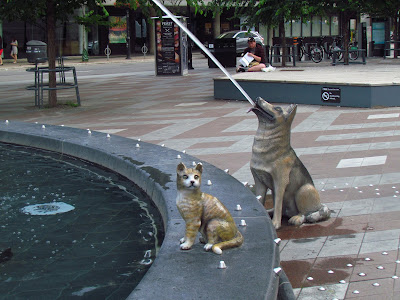 Vik Pahwa to the left (sorry I caught you, Vik, with your face covered) would give us ideas on what to look for in a scene, plus angles and suggestions on how to shoot architecture. At each location, Katelyn would give us background history of the area. Both were excellent and approachable. 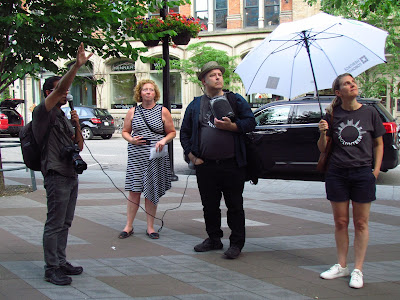 The Flatiron Building is one of the most famous buildings in Toronto. It was built by George Gooderham in 1891, a decade before the one in New York. I didn't know that when George passed away in 1905, he was listed as the wealthiest person in Ontario and the taxes collected on his estate took Ontario out of a deficit. 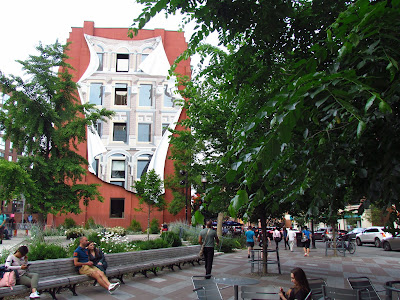 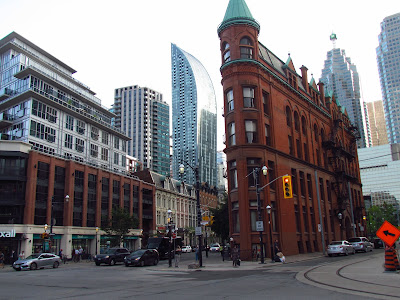 An older section of Front Street. 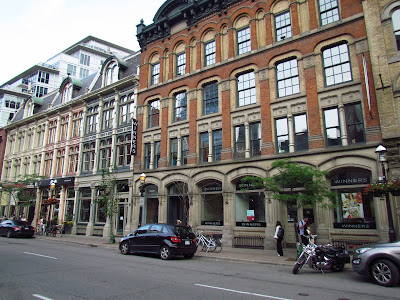 Berzcey Park is named after William Berzcey who was a co-founder with John Graves Simcoe of Toronto. This work of art honours him. 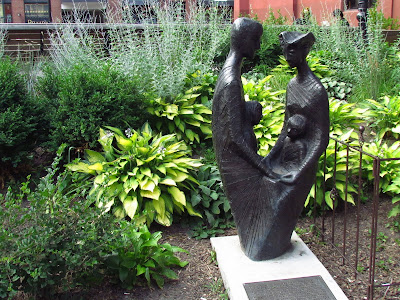 St. James Cathedral, was opened on June 19, 1853. It's hard to get a good picture of it. Lots of detail to shoot on the building. I'll return another time. 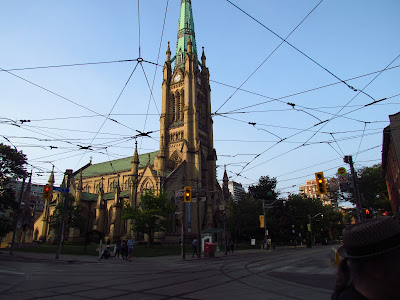 10 Toronto St is the home of Toronto's seventh post office which opened in 1853 and is a national historic site. It's best known as being the head office of E.P. Taylor's Argus Corp and the downfall of Conrad Black.

I always wondered why the back of the building had curved walls. Back then, horse and carriages were used to transport the mail and the building's rear walls were rounded to allow them easy access to the rear of the building for loading and unloading. 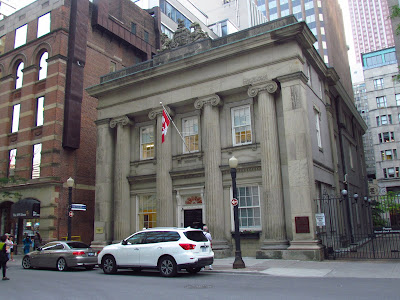 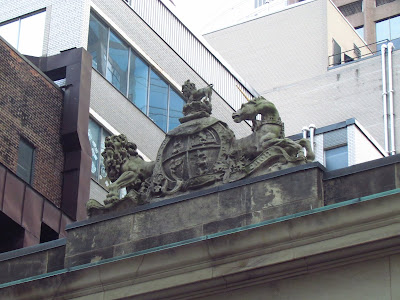 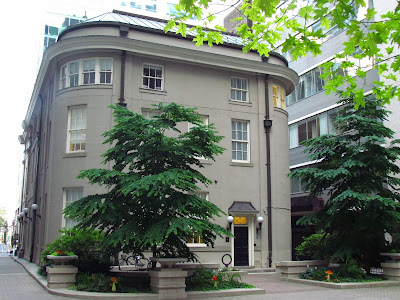 We went to Commerce Court. I loved the carvings in the back wall. 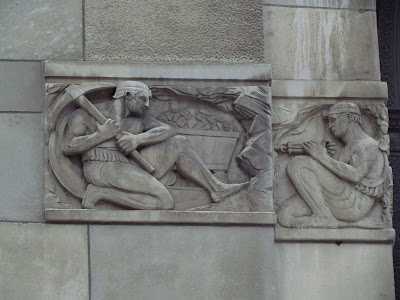 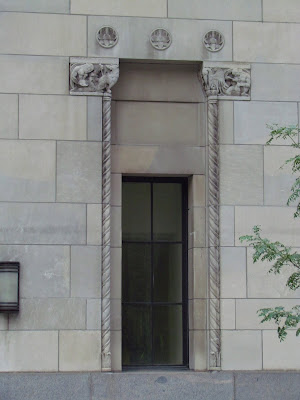 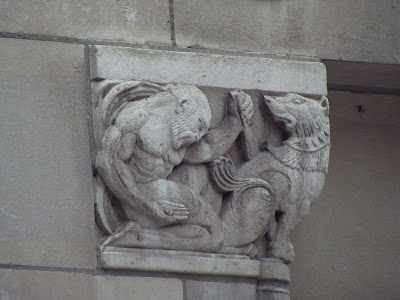 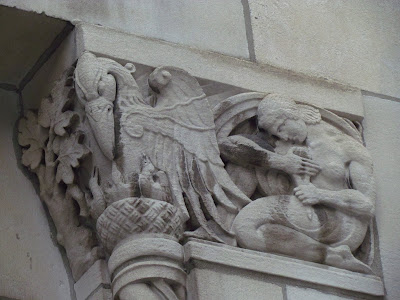 Much of the courtyard will disappear due to a new tower being built. It's a shame as I enjoyed many lunches here in the sunshine when I worked at King and Bay. There's a beautiful fountain in the middle of the square with elephants approaching for a drink. 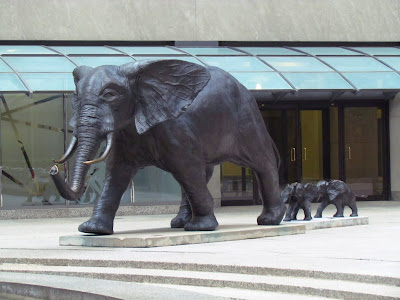 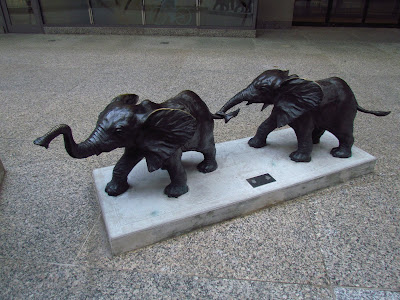 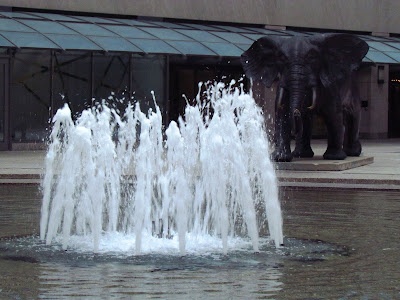 Photography of architectural shapes can be interesting. 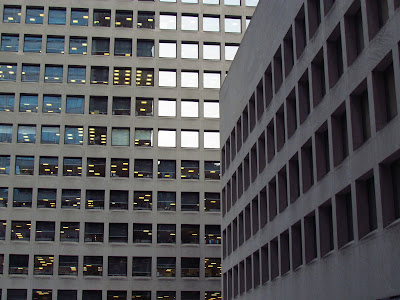 The 14 story Concourse Building is now almost lost with the new EY tower plunked on top. 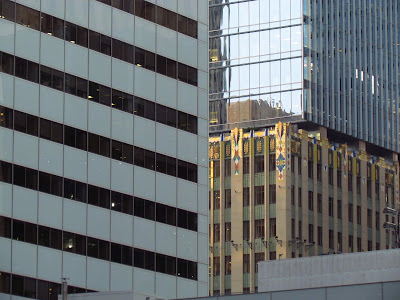 Resting cows in the park at the TD Centre. 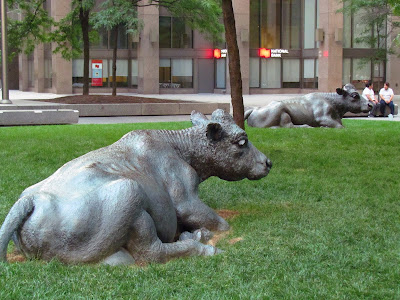 I managed to capture the moon over this building which is having the heavy granite tiles removed. 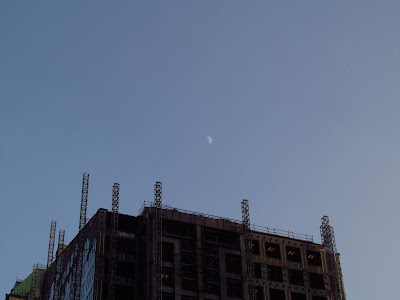 I love trying to shoot photos of our city's old and new together. This would have been a much better shot of the "L" building and Union Station if this guy's head wasn't in it. 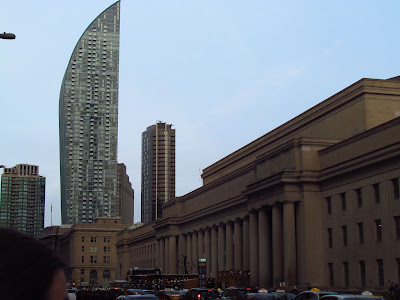 I really enjoyed the walk and learned quite a bit on what to look for in shooting a city. Along the way, I also learned much about our city's history which I was unaware of. I plan to return to each of these sites and others in the city to take my time and focus on each individually.

The next tour for this event is on October 6, 2019, at 1:30pm. An afternoon instead of evening walk. As I'm retired, I plan to be there to take better shots in afternoon light.
Posted by Swordsman at 22:57