A Look Back at Music and the Stores That Sold Them 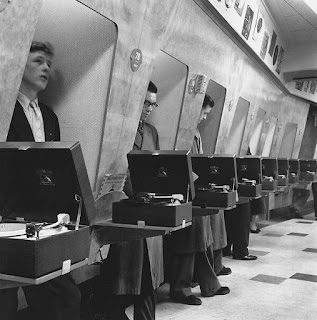 I found this picture on Twitter and saved it. These are record store listening booths in England circa 1962. Nowadays they are known as vinyl stores if they sell records, or music stores if they sell music in different formats. In this article, I will be showing my age.

The first way I'll do that is to admit that I have owned Led Zeppelin 2, originally purchased new in 1969, in every format. Great album but the changing technology has cost me a lot of money for it over the years.

When I was finally old enough to go to record stores, there were listening booths at the back of larger record stores but more up-to-date than the one shown here.

Growing up in Willowdale, the closest music store to me before Fairview Mall was built in 1970 (yes, I am that old) was the Sam the Record Man in Newtonbrook Plaza at Yonge and Cummer.

When you came through the door, the cashier's counter was on the right. Mounted on the wall behind it was a large slotted shelf with 50 slots, almost like mail slots, each one number from 1-50. The slot would hold a stack of 45s, single play records and the number represented its place on the Chum Chart.

I know further explanation is need for what I just wrote. 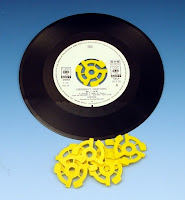 A "45" was a small record that had just one song on each side. The "A" side had the feature song on it and the flipside usually had some crappy filler song. The record had a big hole in the middle that required an adapter so it could be played on a record player. Why was it bigger? Likely to sell the piece required to play it! It was interchangeable but if you wanted to stack the records on a player, then one was needed for each. We all cursed it!

The next question would be ... what was a Chum Chart?

Toronto had a rock and roll radio station with the call letters C-H-U-M, which, of course, spells chum and was located at 1050kHz on the AM dial and was known as 1050 Chum. Each week it put out a pamphlet with the record ratings for the week, based on sales. From 1957 to 1968, it was the top 50 and after that the top 30. Kids like me waited in anticipation each week to see where our favorite records stood.

The middle and sides of the store had large bins with albums (33 rpm records with six to seven songs on each side) stacked vertically so shoppers could flip through them. In the downtown Sam the Record Man store on Yonge Street, they had a basement full of bins of old and discontinued albums. Gems could be found if you flipped through patiently. I personally spent hours flipping through those bins. 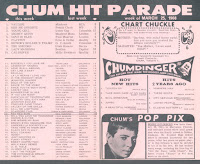 The store closed in 2007 and the large iconic sign that hung above the store, which everyone knew and was a piece of Toronto history, was put into storage by Ryerson University who promised to put it on a building they were constructing on the same spot. They lied, though, and claimed the neon would clash with the new building's architecture and could be dangerous if the sign broke and there was a mercury spill.

So basically they lied when they submitted to take down the sign, which had a historical designation from the city, and obtain a building permit. The bastards! I wonder if they teach fraud to their students.

The sign was resurrected above a building at Yonge/Dundas Square but is so high and set back it's easy to miss. I hate Ryerson for it!.

Now they way people obtain music has completely changed. It all can be done from home. There is so much to say about how accessible music is now but there is also something to be said for the way it was. You could hold on to what you bought. Read the album liners. Lend it to friends. Now a person's music sits in a program on their phone or laptop.

No doubt it is better today but there is a part of me that misses records and albums. 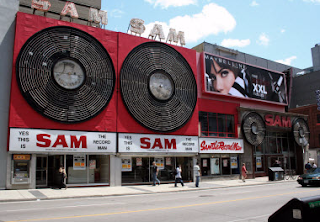 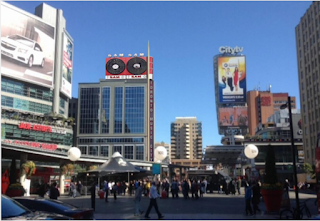