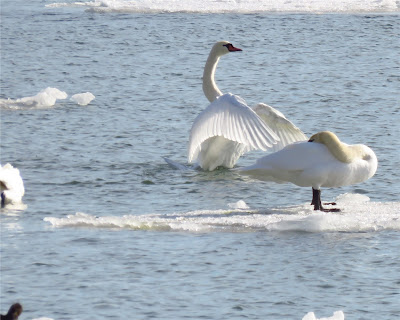 It was a beautiful day after all the freezing cold and snow that we've had lately so Teena and I decided to head on down to the waterfront for a walk. We parked at Coronation Park, which has scenic views of the water and the city and headed west. 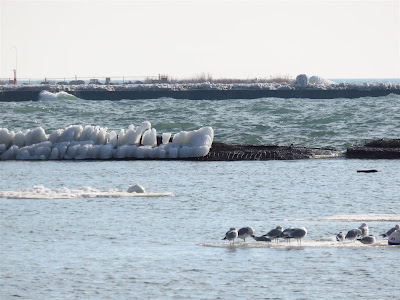 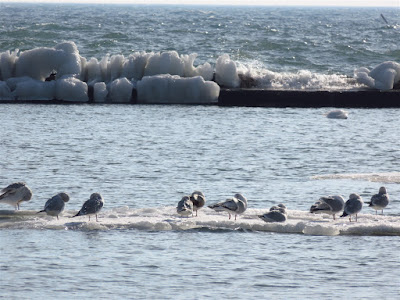 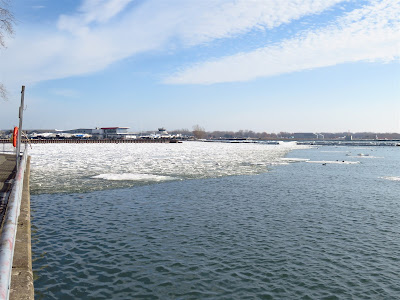 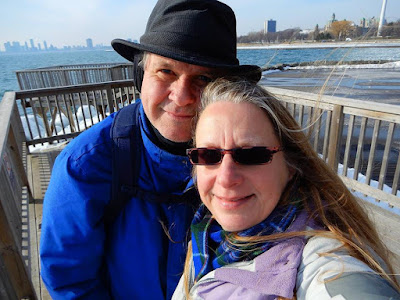 A great view of Toronto. 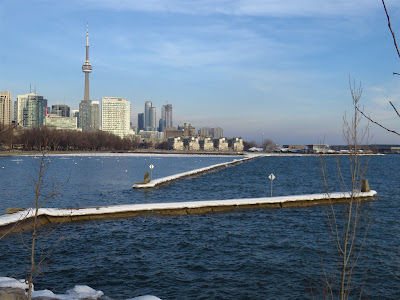 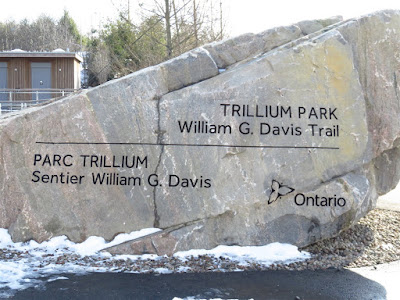 The ravine and Moccasin Identifier.

Developed in collaboration with the Mississaugas of the New Credit First Nation, the Ravine walls celebrate First Nations’ heritage and culture with the Moccasin Identifier, a visual reminder to recognize and honour the past. 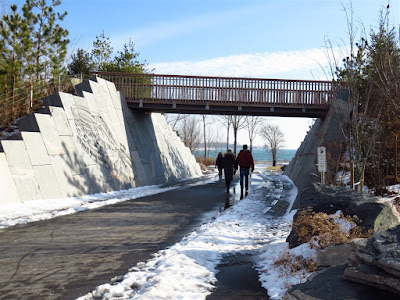 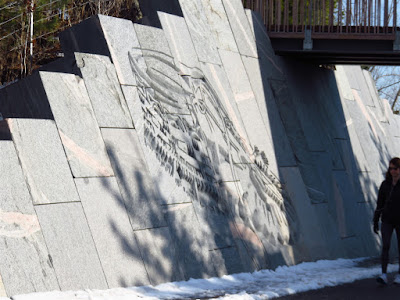 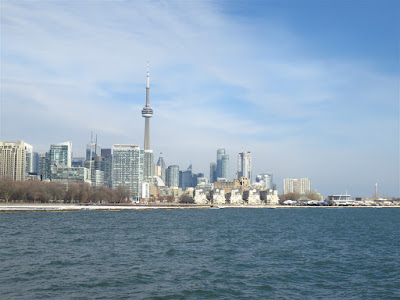 This ice form looks like an animal trying to get a drink from the lake. 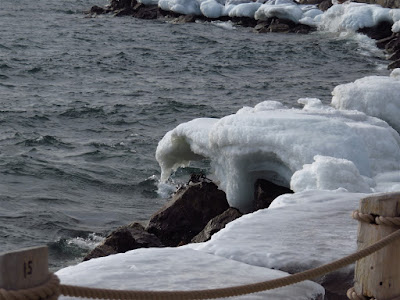 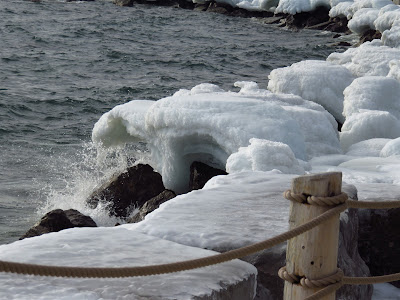 I enjoy looking at the way ice forms against the rocks and trees. Unfortunately most of my ice shots did not turn out. 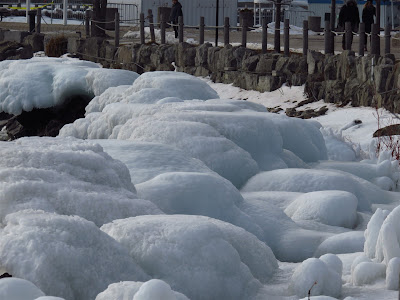 The snow has all melted away with the warm temperatures the past couple of days. 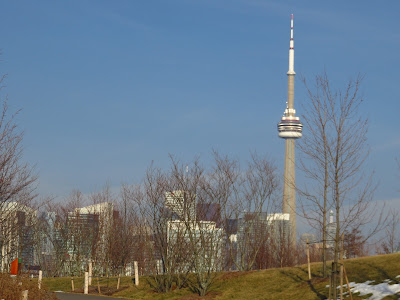 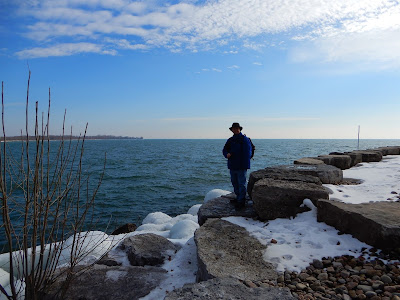 Ontario Place is being redesigned and this year has winter activities. 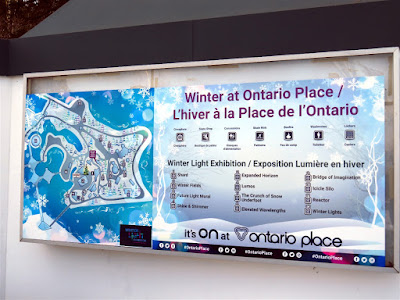 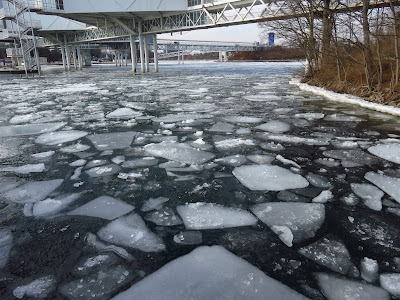 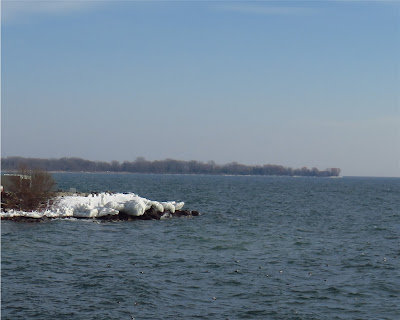 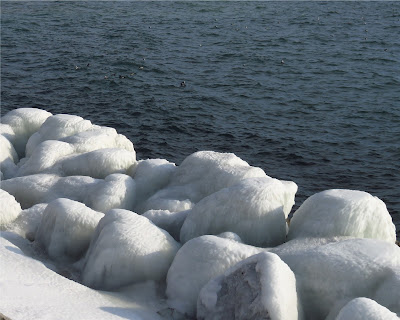 This area is nice as there is a wind block all around it. There is an ice rink, snack bar, Muskoka chairs, a winter light exhibition and a fire pit where there is a nightly bonfire. 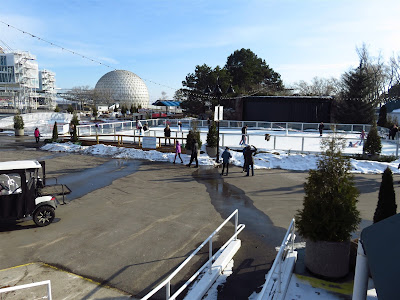 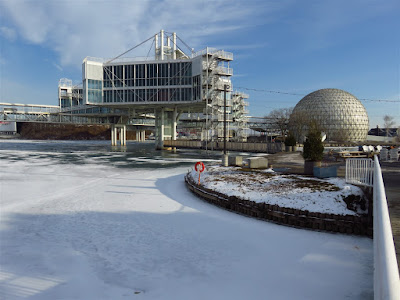 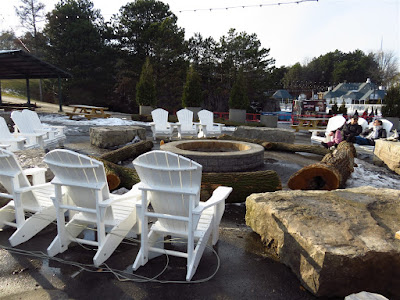 Here is the 1200 pound Japanese Temple Bell which has been in place since 1977. Sadly, at the moment the bell cannot be rung by passers by as in the past as the large log that was swung into the bell has been removed. Yes, I've rung that bell many times in the past.

Cast in Japan of solid bronze by craftsman, the 1200 lb bell was commissioned by the Japan External Trade Organization for its trade exhibit at the CNE in August 1977. At the end of CNE, JETO offered the bell to the Toronto Japanese Canadian Centennial Committee. It was their suggestion to donate the bell to the province as a centennial gift from Japanese Canadians of Ontario.

The provincial government of the day graciously accepted the gift and chose to locate it in the province’s premier park, Ontario Place. 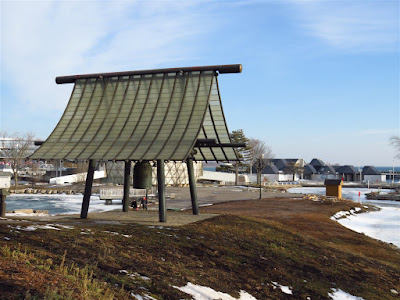 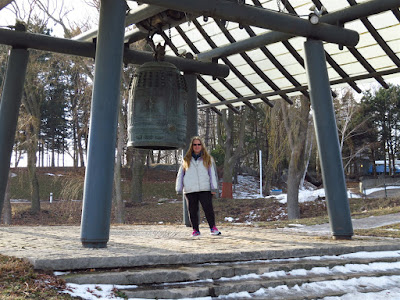 Teena and I always enjoy walking along the waterfront and today was no exception. It was a great way to spend the afternoon.
Posted by Swordsman at 16:00

Labels: A Gord's Eye View of Toronto, Things to do in Toronto, Walkabout