Out of the Depths, The Blue Whale Exhibit at the ROM 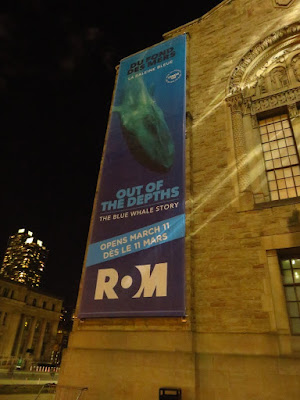 Tonight Teena and I were at the opening gala for the Blue Whale Exhibit at the Royal Ontario Museum (ROM). The exhibit opens to the public on Saturday March 11.

In 2014, a tragic event occurred off the coast of Newfoundland when nine rare blue whales became trapped in ice and died. Their loss represents about three percent of the Northwest Atlantic’s blue whale population; in Canada that’s almost equivalent to the human population of Saskatchewan. Blue whales usually sink when they die but in an unusual occurrence, two of the blue whales washed ashore in Trout River and Rocky Harbour, Newfoundland and Labrador, offering an unprecedented opportunity for research.

Working with the Department of Fisheries and Oceans, Research Casting International and the local communities, ROM scientists de-fleshed and recovered the bones of this endangered species, transporting them to Ontario. After a two-year process where the bones were buried in manure and de-greasing, one of these awe-inspiring animals is ready to be displayed at the ROM. 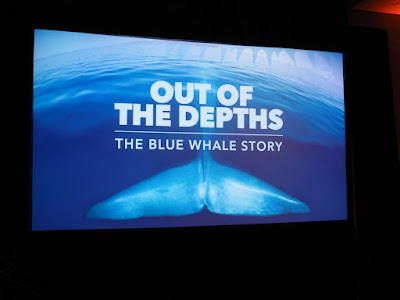 "Out of the Depths: The Blue Whale Story" is a ROM original exhibition that retells the tragic story of 2014 and the unprecedented opportunity for research and conservation that resulted.

Come face to face with the enormous eighty-foot skeleton of Blue and discover the mind-blowing biology of blue whales; the humongous size of their heart, their unusual feeding behaviour, how they communicate and their evolution from land to sea. Find out how the ROM is studying their DNA to unlock some of the mysteries surrounding these large but elusive creatures, and gain insight into the global decline of the blue whale population and what is being done to protect the world’s largest animal … ever.

When you first walk into the ROM, you are greeted by this huge dinosaur. Although it is a little longer than a blue whale, the blue whale has it beat handily in weight 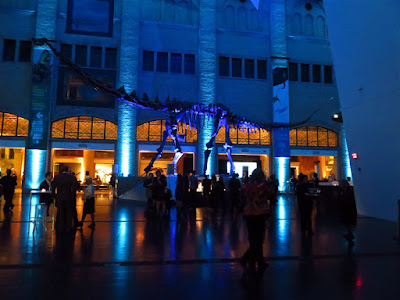 There was a cocktail reception followed by speeches. This is Mark Engstrom, Senior Curator and Deputy Director of Collections and Research. He was an excellent and interesting, humorous speaker. 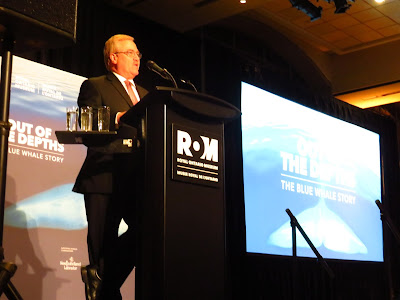 I cannot remember this gentleman's name but unlike George Castanza on Seinfeld, he is a real marine biologist. 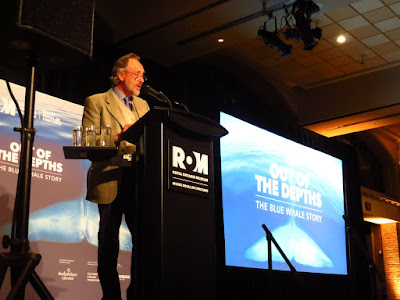 When you first enter the exhibit, there is a three screen theater with a five minute film about blue whales and the recovery. 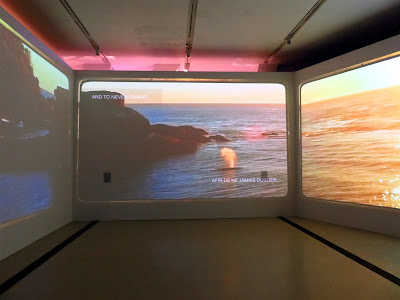 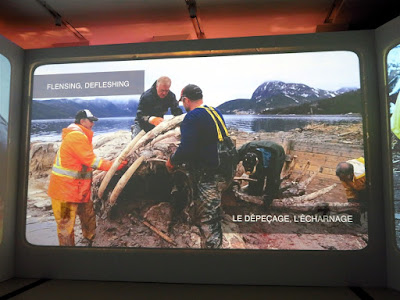 After each day, the crew was hosed off but it seems that the smell sticks. It was noted that the crew returned a rental car and a week later the rental company called to say they would be charged extra to get the stench out!

Mark's watch (I love that it is a Fossil brand, perfect for a curator) never lost the stench. You can life the lid and take a whiff. Yes, it did really smell bad! 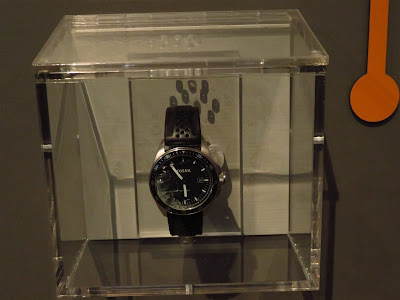 Around the corner was the completely assembled blue whale. It is around 30 meters long which is about the length of a double long street car, or put another way, longer than a basketball court. 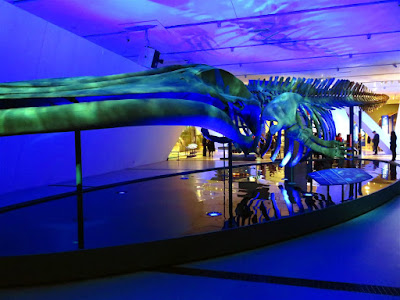 There is a scale you can step on. The screen tells you how many of you it would take to weigh as much as this whale. 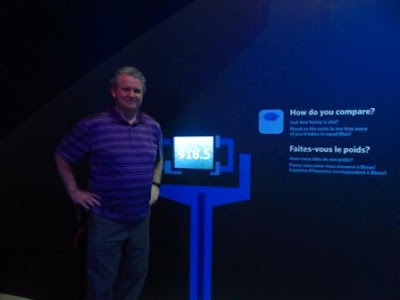 It would take just over 927 Gords to make up the weight of this whale. 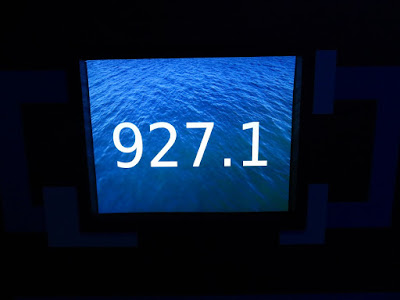 This gives an idea on how big the mouth is and it's much bigger than it appears in this picture. 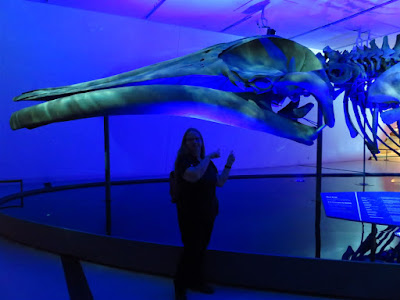 It was hard to get the entire length into a photo. 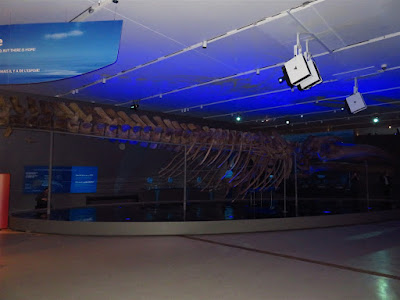 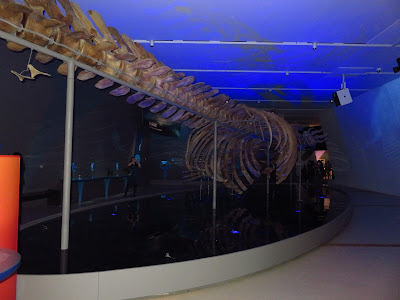 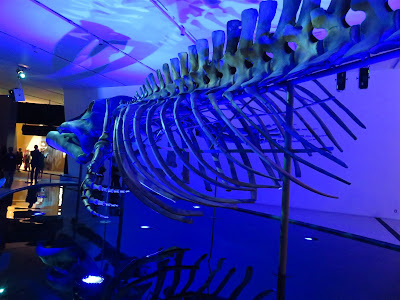 These whales don't play songs like other whales. Their communication sounds more like low beats and there is a listening station to hear what blue whales from four different areas sound like. There also is a room with a movie showing a blue whale with their sounds that's worth visiting 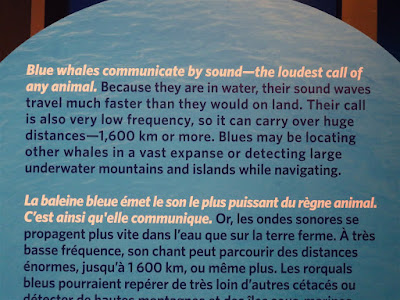 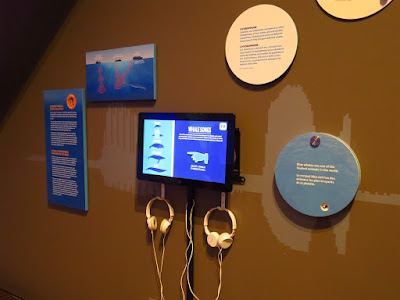 There are parts of the other blue whale that was found. The open mouth is huge! 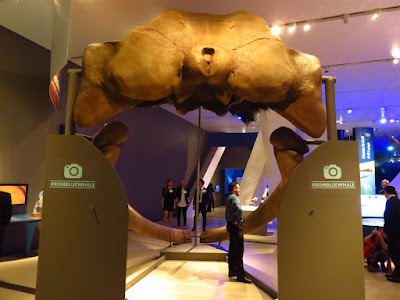 Blue whales live if plankton and krill. They eat 8,000 pounds (3625 KG) a day. This is a jar of krill and they show a short film on how they swim as a close group making it easier for the whale to feed. Blue whale poo! No, we didn't get to smell this. 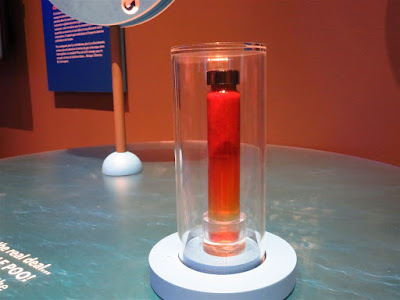 A big creature has a big heart. A blue whales heart is the size of this car. 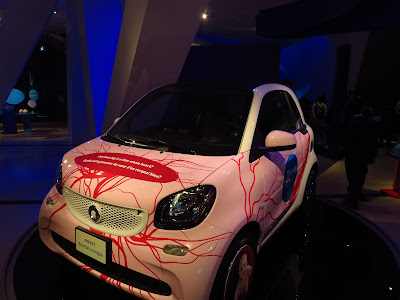 The exhibit also shows how they were hunted in the past and the products that were made from them. It is estimated that there are only 1,500 to 2,500 blue whales left in the world and although there is a moratorium adopted by the International Whaling Commission to end all whaling, some countries and companies still hunt them. 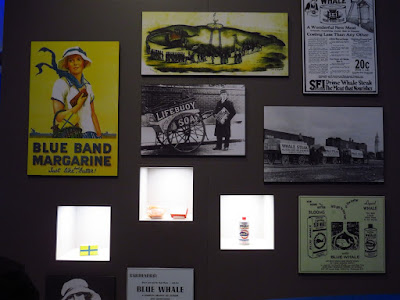 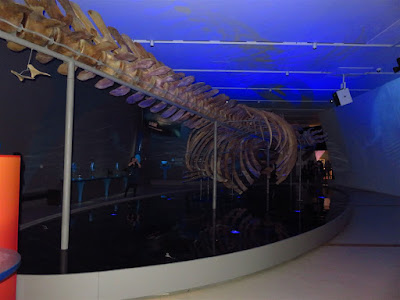 At the exit, there is a basket of wool string to sting up a design of a whale. Teena and I both added lines. 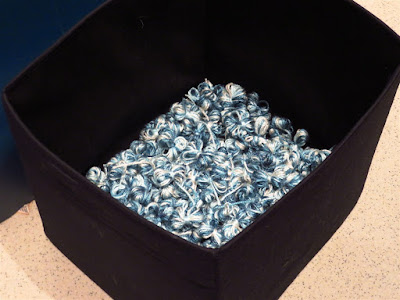 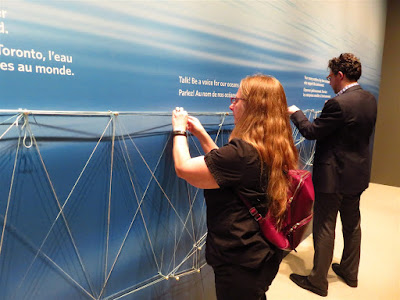 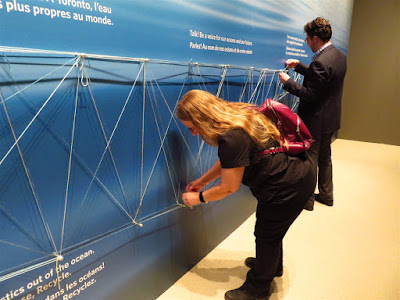 Here are Teena and I in the mist at the exit. 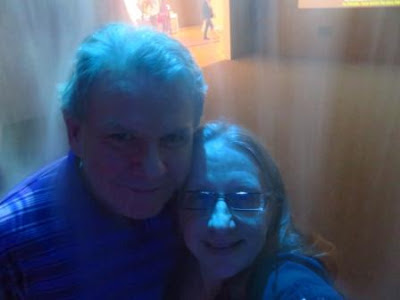 The exhibit is fascinating and interesting. I learned a lot and had a good time doing it. Out of the Depths is definitely worth a visit.
Posted by Swordsman at 22:38