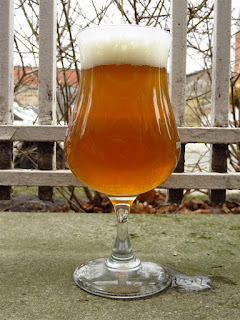 My neighbour, Andy, was at it again. He is a home brewer and in the past has given me a stout  and an IPA to try. Both were delicious! This time he came up with a Belgium Tripel.

So what is a Belgium Tripel? According to Craft Beer.com:

Complex, sometimes mild spicy flavor characterizes this style. Yeast-driven complexity is common. Tripels are often on the higher end of the ABV spectrum, yet are approachable to many different palates. These beers are commonly bottle-conditioned and finish dry. Tripels are similar to Belgian-style golden strong ales, but are generally darker and have a more noticeable malt sweetness.

So how is this one?

Andy's Tripel poured golden, maybe light amber in colour. It was a lighter colour than I had expected. This ale was bottle conditioned, meaning some yeast was left in the bottle so the beer could ferment further as it ages, and poured with a generous white head. It is interesting that I sensed white wine in the aroma.

I had expected a heavy, funky tasting ale but was surprised that the flavours were not overpowering. Again, like in the aroma, white wine seems to come through when I sip. It tastes clean and fresh, with some funk in the finish.

This is a very well balanced and delicious ale. I quite enjoyed it.

Hey Andy! When you brew your next batch, don't forget about me!
Posted by Swordsman at 18:36