Book Review - We Stand on Guard 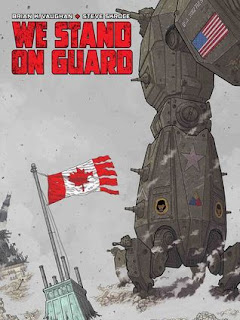 I don't read many graphic novels but just finished We Stand on Guard by writer Brian K. Vaughan who wrote the SAGA series and Canadian storyboard artist Steve Skroce, who has done the storyboards for Hollywood blockbusters such as The Matrix Trilogy, I, Robot, and Jupiter Ascending.

Set 100 years in our future, WE STAND ON GUARD follows a heroic band of Canadian civilians turned freedom fighters who must defend their homeland from invasion by a technologically superior opponent...the United States of America.

The original story was told in a series of six comic books, all of which are combined here in one book.

I found that the artwork was great and the story entertaining, but felt that the story moved along too quickly. It would have worked better for me if some of the story lines were more fully flushed out. But that might just be me. As I am not used to reading graphic novels I really don't know if this is the normal pace of a book like this or not.

It's always good to read different kinds of stories and I am glad I read this, as I did enjoy the story.
Posted by Swordsman at 17:31