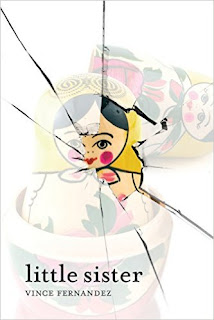 Mila Mirkin and John Lister want success any way they can get it. For Mila, that means working as an escort to finance grad school. For John, it means getting his hedge fund on track even if he breaks a basic moral tenant: thou shalt not kill.

Following the mysterious death of Toronto's top financial prosecutor, Vitaly Mirkin is transferred to the role. His first case is against John Lister. Mila's brother is prosecuting her primary client. As John's ruthless plan unfolds, he pulls Mila ever closer, leaving her in a terrible quandary: tell her brother what she knows and expose her secret life, or pretend innocence and put the lives of others in mortal danger.

"... medical devices can be hijacked with a few keystrokes ... the sooner the deaths of the insured, the better the financial returns of investors ... This alarming reality is why Vince Fernandez wrote "Little Sister". His chilling debut novel ... puts a new spin on an old question: How far will you go to get what you want? I find few things more riveting than a good story that peels back the professional veneer of financial power brokers and exposes the underbelly of their corruption, greed, sexual predation, and revenge. With "Little Sister", Vince succeeds in doing just that."

I enjoy thrillers and this one did not disappoint. It is well-written and very fast paced. Mila Mirken is a fascinating complex character who seems stuck in an impossible situation with John Lister, a person that I found quite easy to hate.

It was an enjoyable read and I'll be sure pick up Fernandez's next book when it comes out.
Posted by Swordsman at 21:09