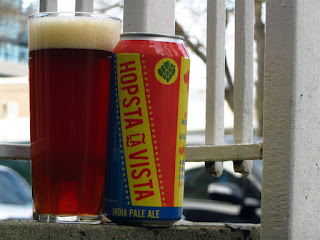 I haven't done a Beer of the Week as I have a real bad cold and couldn't smell or taste.  But now, as Arnold Schwarzenegger says, I'm back! Kind of fitting then that I'm back with beer called Hopsta La Vista from Longslice Brewery.

Although Longslice has a Toronto address, they currently are contract brewing out of Stratford Brewery, which is located in Stratford until they can afford to set up their own brewery. Brothers President Jimmy Peat (their website points out that he is the older brother) and Vice President John Peat started brewing their own beer in high school, as they weren't yet old enough to buy beer but could buy the ingredients to make beer. 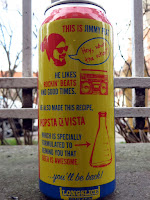 Many years later, Jimmy entered Hopsta La Vista, which they call an English/American hybrid IPA, into the 2013 Toronto Beer Week Home Brewers competition and came home with a silver medal. In 2014, the brothers, along with their friend, Sebastian Lesch, started up Longslice Brewery and found success by taking the gold medal at the 2014 Ontario Brewing Awards in the British IPA category.

I have had it at craft beer festivals and had enjoyed it but always wanted to try it on its own. Now that it's available from the LCBO,  I can now try it at home.

Hopsta La Vista pours brownish in colour with a light off brown head. It has an earthy aroma, with a hint of bitter hops, much like one would find in an English IPA. The head takes its time in settling and lots of lacings are left on the inside of my glass as I sip.

This beer stays true to its name as two kinds of hops come through in a single sip. How? Well, it starts with a familiar English IPA, malty with an pleasant earthy bitterness but finishes with bitter citrus on my tongue and on the sides of my mouth.

Hopsta La Vista will be a regular visitor to my beer fridge and I will definitely be ordering it when I see it on tap. 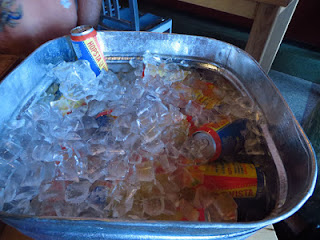 Labels: Beer of the week