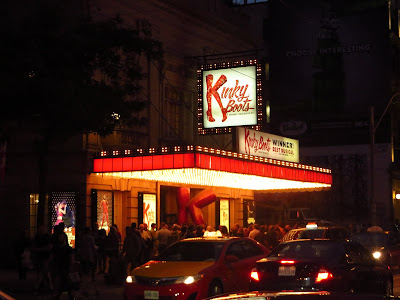 Tonight Teena and I went to see Kinky Boots at the Royal Alexander Theater (aka the Royal Alex). We both enjoyed the original movie and looked forward to seeing this. We were not disappointed.

With songs by Grammy® and Tony® winning pop icon CYNDI LAUPER, this joyous musical celebration is about the friendships we discover, and the belief that you can change the world when you change your mind.

Inspired by true events, KINKY BOOTS takes you from a gentlemen’s shoe factory in Northampton to the glamorous catwalks of Milan. Charlie Price is struggling to live up to his father’s expectations and continue the family business of Price & Son. With the factory’s future hanging in the balance, help arrives in the unlikely but spectacular form of Lola, a fabulous performer in need of some sturdy new stilettos.

Many people were having their picture taken with the huge boots outside the theater. We did too! 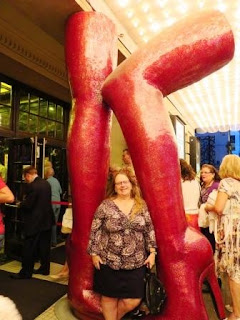 The play is fabulous and stays very true to the movie. I can't say enough about how great Alan Mingo Jr. was at playing drag queen, Lola. Graham Scott Fleming was excellent as Charlie. I also thought AJ Bridel was excellent as Lauren, the girl in  love with Charlie. Her songs were hilarious and she could pull off some comedic moments during them.

The set  was crafty and inventive in its design, turning itself into many places during the course of the story.

It's a great play. No wonder its run has been extended to December 20th. 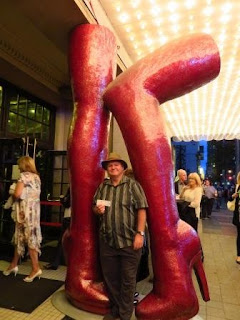