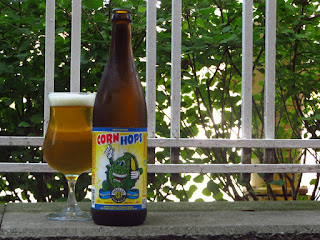 When Teena was in B.C. recently, she brought me back a 650 ml bottle of Corn Hops from Parallel 49 Brewing.

In their own words, here is their story:

Three of Parallel 49’s founders grew up together in East Vancouver less than ten minutes from the spot where the brewery now stands. Mike, Nick, and Anthony had been avid home brewers and craft beer enthusiasts for years before they finally decided to turn their shared passion into a full time gig.

In 2008, the three friends quit their day jobs and opened a restaurant that quickly became known as a mecca for craft beer enthusiasts in Vancouver. As the restaurant business thrived the guys turned their attentions back to the enduring dream of opening their own brewery.

The guys decided that it was time to stop talking and start brewing. They teamed up with Graham With, a respected home brewer; and Michael Tod, a friend with a wealth of sales experience in the BC craft beer industry. The newly assembled Parallel 49 team set out to create the unique brand of Vancouver craft beer that they had been thirsting after for years. 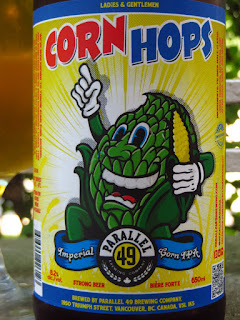 I will say they have a very fun label, a hop coming out of the corn husk. It's pretty bright too but corn in beer reminds me too much of how the macro breweries add so much to their lagers and how light tasting they are. This is, however, an Imperial IPA, so at 8.2% APV, there has to be a nice powerful taste to this.

Corn hops pour a light golden colour with a white head which quickly goes away. The aroma has a citrusy hop note and something else, which I can't identify and don't really enjoy. Perhaps the flaked corn?

The taste is a different story. When I sip, I sense a piny hop note, which then evolves into a layer of wonderful citrus bitterness. Very enjoyable!

I'm glad I tried it but if I had the chance would not get it again. It's about an 8.2% beer in a large bottle. I'd rather have two or three other lighter APV beers rather than one big imperial one.

If you like Imperial IPAs though, give this one a try if you get the chance.

A picture of the brewery from Mike's Craft Beer. 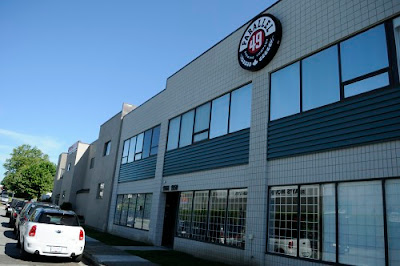