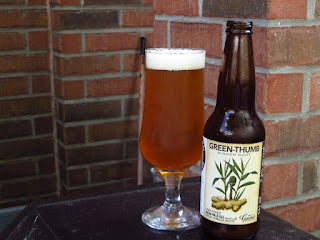 This week's Beer of the Week is an IPA with an unusual twist. It has ginger root added to the brew.

Garden Brewers, a contract brewery working out of Black Oak Brewing, released their first beer, Piperales, which is a smoked ale infused with crushed black peppercorns in the summer of 2014. The owners, Victor and Sonja North, hope to one day make their brewery a bricks and mortar operation somewhere in their hometown of Hamilton.

Victor previously was a brewer at The Ship in Hamilton and the head brewer for the 3 Brewers Oakville location. He also is a certified BJCP beer judge. Sonja, who is also a beer judge, worked as a coordinator for Black Oak before taking on the sales and marketing duties at Garden Brewery.

Green Thumb is a variation of a beer Victor once brewed for The Ship. It is an unfiltered beer that has fresh ginger root steeped in the beer after the fermentation process. This beer took the Bronze Medal at this years Ontario Brewing Awards Vegetable Beer division.

Green Thumb pours amber in colour with a white head. I was expecting ginger to be in the aroma and was surprised by it's absence. Ginger is not missing in the flavour profile however. In the first moment, there is no ginger but then the ginger comes into play very nicely, filling my mouth with flavour then giving my tongue a slight burn. The ginger backs off but is present throughout the finish.

This is a nicely unique beer and quite enjoyable. Although the ginger is not overpowering, it still is not a beer I could sit down and have a few of. The 7.2% APV also makes it not a sessionable beer but having one here and there would be quite nice.

I just getting over bronchitis which has had me down all week. I've read that ginger is is excellent in combating that ailment, so my timing in having this beer is perfect. Gotta love a beer that's medicinally good for you!