Beer of the Week - Piton Lager 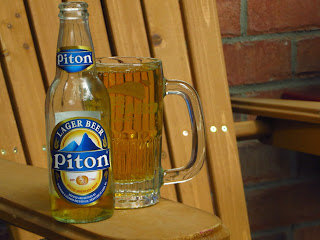 Teena was in St. Lucia a week ago and she came home with a couple of Piton Lagers brewed by Windward and Leeward Brewery, which is located in Vieux Fort on the island.

In the early 1970s, Heineken was looking for a place to set up their first brewing operation in the Caribbean. Vieux Fort was chosen for the quality and abundance of the water in the area, plus there were many concessions made by St. Lucia under their Incentive Legislation to bring jobs to the island.

Piton Lager comes in a surprisingly small 275 ml (9.3 oz) clear bottle. As light is one of beers' greatest enemies and the Caribbean is know for its sunshine, I wonder why they don't use brown bottle to keep the beer from becoming lightstruck. Maybe that's the reason for the smaller bottles. It takes less time to drink a small bottle of beer so it has no time to become adversely affected by the sunshine.

There is a strong grassy aroma that I noticed right away when the bottle was first opened. The beer pours a very light yellow or straw colour. As it was so light, I thought it would be a very watery beer but it has a stronger lager flavour, much stronger than North American lagers. There is no hop bite anywhere throughout but it is not sweet. It would be a decent beer to have in the hot St Lucia climate.