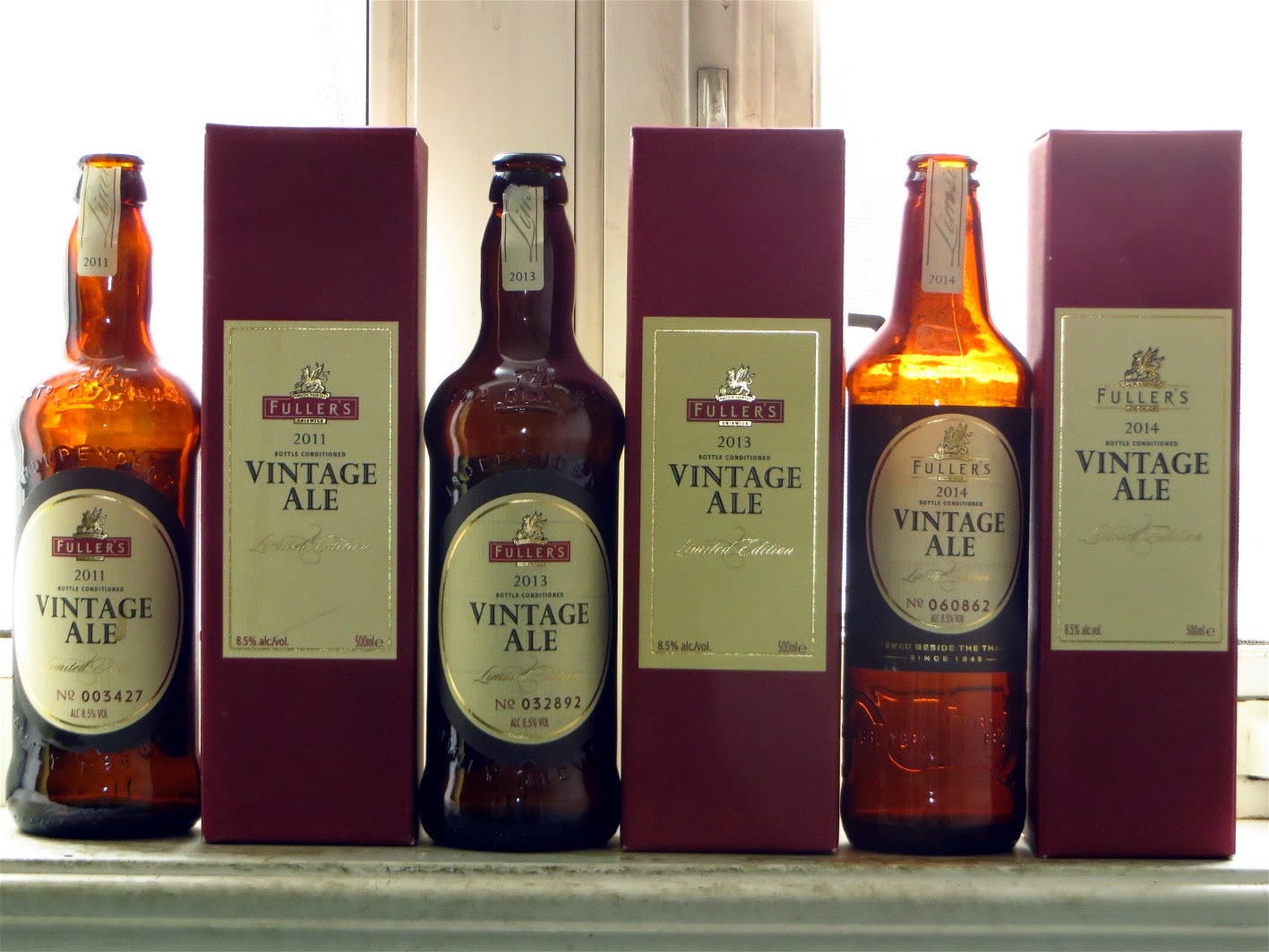 Fullers started brewing their Vintage Ale in 1997. Their idea was to use basically the same recipe, slightly tweaked from year to year, the same yeast, but use the only the very best malt and hops of that year. I started with the 2008 and have done every year since except for 2012. I have no idea what happened there!

Fuller's Vintage Ale is brewed in small batches each bottle being numbered. They used to say how many were produced but I can't find the number for the past couple of years. There were 150,000 bottles of the 2011 produced but I am unable to find how many of the 2013 and 2014 were bottled.

I enjoy storing the beer, Fullers recommends laying the beer down when doing so, and then trying and comparing to the previous two years. The beers below I tasted on three separate days to ensure I didn't confuse the flavours. 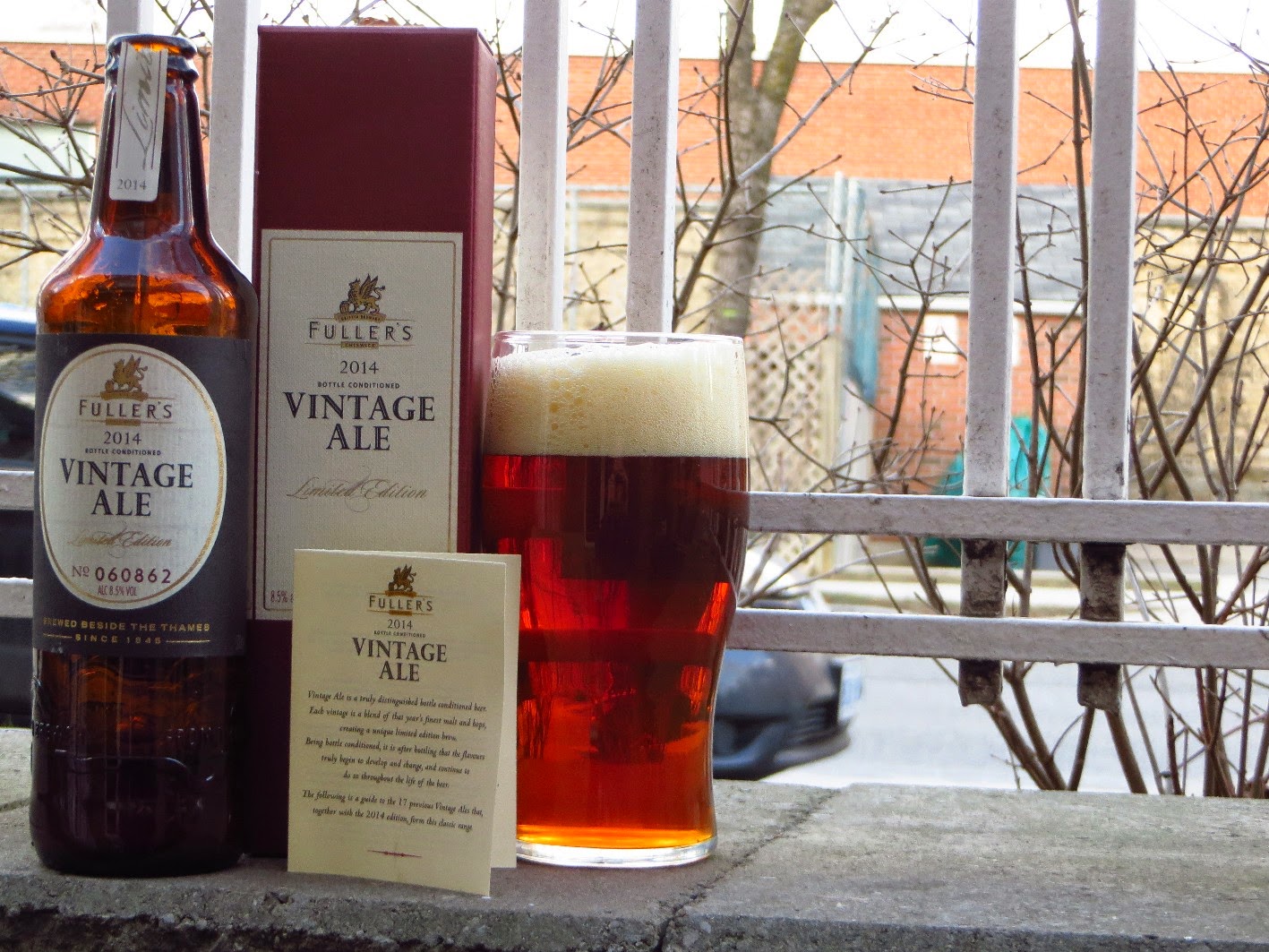 This is the 18th edition in the range and has been brewed with three of this year's finest hop varieties from both sides of the Atlantic. Goldings, from England, has been used for subtle bitterness and American varieties Liberty and Cascade were used in dry hopping to give a zesty, grapefruit aroma.

“As a truly distinguished bottle-conditioned ale, each vintage improves in the bottle with time. Bottle conditioning means that a little yeast is left in the bottle, which will mature slowly over the years like a fine wine or whisky- well beyond the 'best before' date that we are obliged to state.

Interestingly, the best before date on this one is the end of 2024, ten years from when it came out.

The 2014 pours amber in colour with an off white, slightly brownish head. It's a lively beer and was very hard to keep the head down to a decent level. Even though this beer uses American hops, the aroma is dominated by the scent of the Goldings, an English hop which seems to always claim that yes, this is an English ale. A hint of caramel also is present.

I find that this starts with a little sweetness, with a slight caramel taste before those wonderful English hops come through. The is a little grapefruit in the bitterness but the English Goldings dominate.

What a wonderful ale. I can hardly wait to see how the other two bottle I have ages. 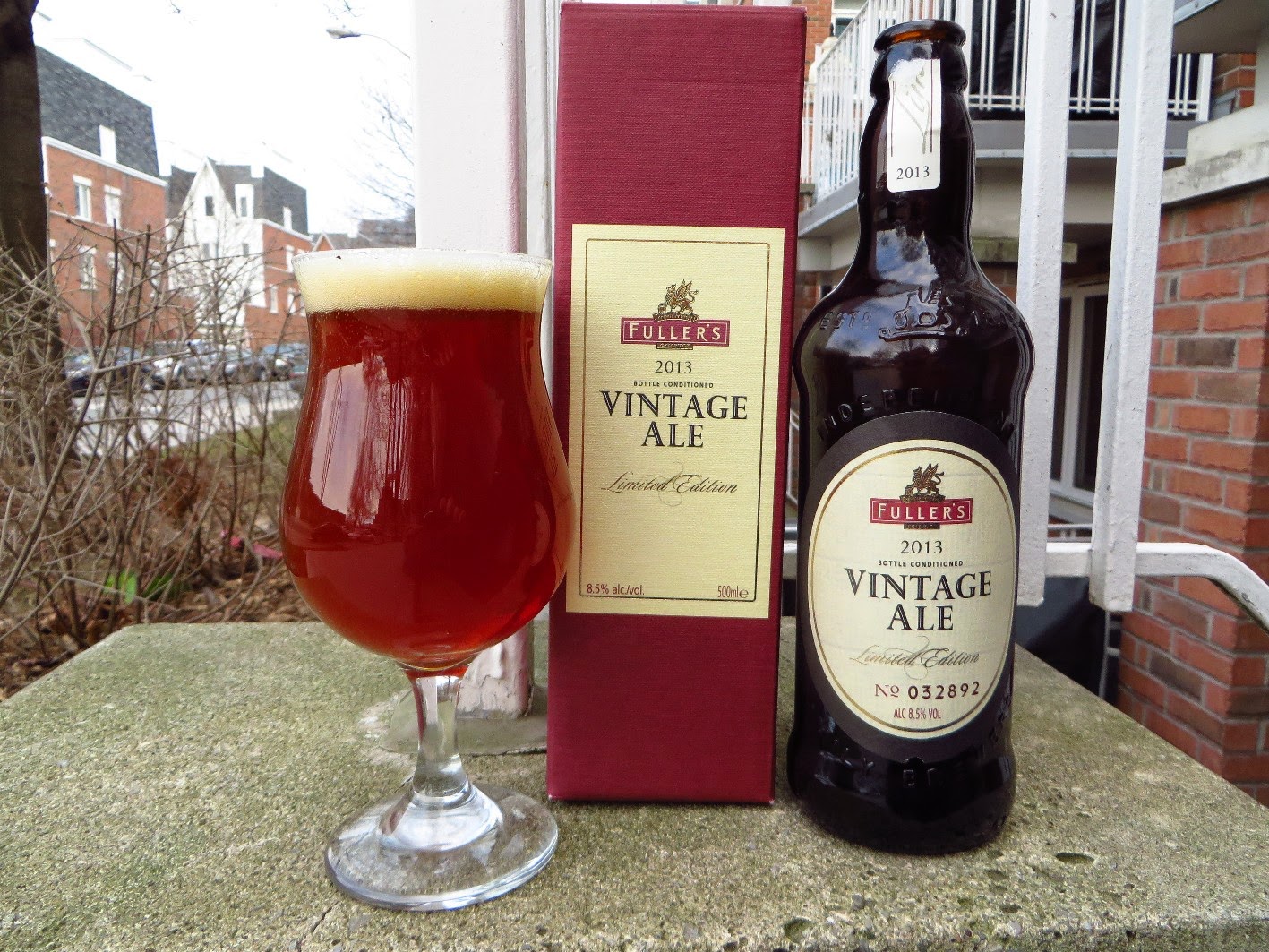 The 2013 Vintage Ale, our 17th edition, is brewed with four of this year's finest hop varieties. Goldings, Sovereign, Challenger and the trophy-winning Admiral. With a dry spring and wet summer, we have chosen a winter barley which, when combined with our unique yeast, gives a rich and complex result.

As with the 2014, this beer pours with the same amber colour and same head. The head's not as lively as the 2014.  It's aroma is slightly yeasty.

The 2013 starts off a little funky in taste before the English hops come through. It does not have as much bitterness as the 2014 and that hop bite falls away quickly and the beer ends with a long earthy finish.

A decent ale which I really enjoyed. 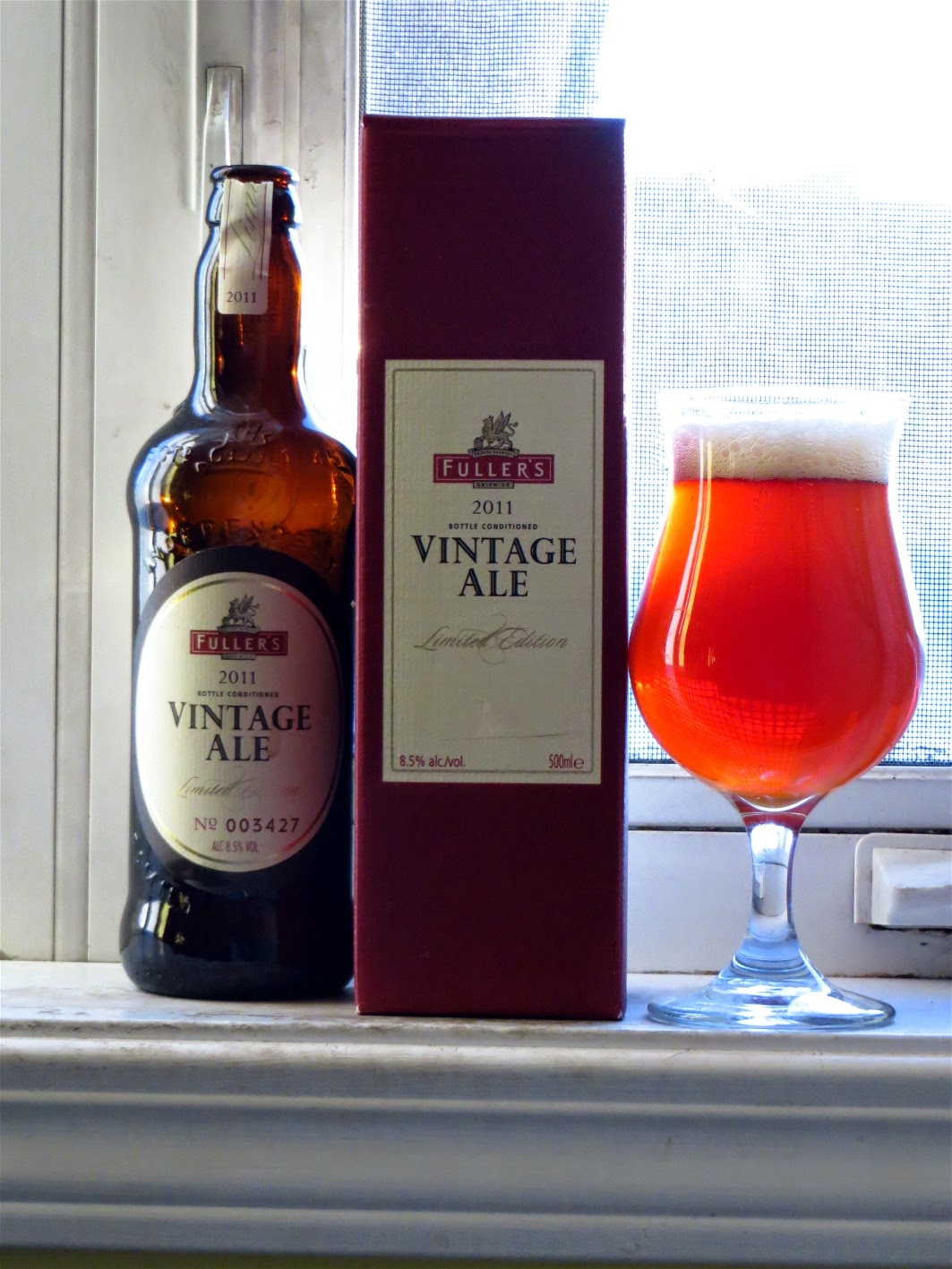 The 2011 Vintage Ale, our 15th, is brewed with some of the finest of this year’s malt and hops. The malt grist includes a portion produced by Warminster maltings, from organic barley grown by Sir James Fuller on the Nestone Park Estate. This will be married with the choicest Goldings, Organic First Gold and award winning Sovereign hops, to produce a beer with a firm malt base, marmalade notes and a satisfying bitter finish.

The 2011 was quite active as I poured but not as much as the others. Again the same colour profiles apply. I found the aroma to have a very earthy tone to it. No caramel, or hops, but earthy is the only way I can describe it.

When I sip it, I do find some caramel in the start which gives way to a nice little bit of English bitterness in the finish. It is a very smooth, well layered and complex tasting ale, which would be the result of three years of aging. It's my last 2011 and was very very enjoyable.

I have two 2013s and two 2014s aging to go along with the 2015 which should come out in December. Comparing the different years is just so much fun to do!
Posted by Swordsman at 16:28