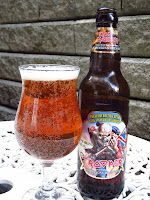 This week I found an interesting beer on the shelf of my local LCBO, Iron Maiden Beer. After reading the bottle I found out that the recipe was created by Bruce Dickinson, the lead singer of Iron Maiden for Robinsons Brewery of Cheshire England.

"I'm a lifelong fan of traditional English ale; I thought I'd died and gone to heaven when we were asked to create our own beer. I have to say that I was very nervous: Robinsons are the only people I have had to audition for in 30 years!"

The beer is named after an Iron Maiden song Trooper which was inspired by the Charge of the Light Brigade, during the Battle of Balaclava during the Crimean War when 600 British cavalry courageously charged the massed Russian artillery. This gallant but foolhardy assault resulted in a massive loss of life and came about due to a misunderstanding of an order given by the Commanding Officer, Lord Raglan.

Although the company has been around since 1838 when William Robinson, The Unicorn Inn's landlord purchased the inn, it wasn't until 1849 that Robinson brewed the his first Ale. The Unicorn Inn is gone now with the Robinson Unicorn brewery being built on it's original foundations. For six generations the company has remained as a privately held brewer with 340 pubs under it's umbrella.

It pours coppery in colour with a white head. Unfortunately a neighbor came by and started a conversation before I could duck in the house to get a sense of the aroma. Damn! There are lacings left behind as I sip.

This is a British Bitter style ale. I found it a little watery in the mouth feel. There is a slight bitterness to start, which disappears but comes back in the finish. It's a nice ale, one that many would like but I found it a little too light tasting for my liking. I'll have the second but I wouldn't buy it again.

For me, Trooper has to be beer of the year! Great review by the way :)