Beer of the Week - Houblon Chouffe 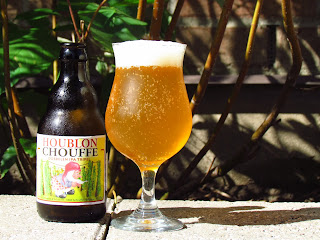 Recently Teena and I looked after our neighbors' cat, Maybeline, while they were on vacation.  When they returned, they gave me a couple a couple of bottles of beer as a thankyou. One was an Ontario craft beer and the other was a Belgium beer, Houblon Chouffe from Brasserie d'Achouffe.

Whenever I hear of a Belgium brewery, I automatically assume it is centuries old. Not Brasserie d'Achouffe. This one was founded in 1982 and seems to have a great affection towards gnomes. There is a picture of a gnome on all their products and gnomes run around the breweries website. In fact, in an article from Atlanta Cuisine, brewery founders, Christian Bauweraerts and Pierre Gobron, give full credit to the quality of their beers to a recipe given to them by a goblin,  A. Chouffe, who was the lone survivor of a colony known as the Dwarves of Achouffe.

The brewery is located in Achouffe, Belgium, and Chouffe means Gnome in one of the dialects of the area. 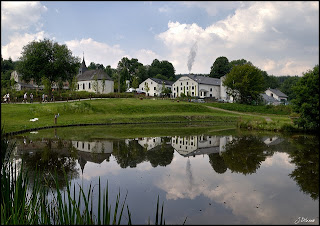 According to the Brasserie d'Achouffe website ... Houbloun Chouffe was first brewed in 2006 and  is an ‘Indian Pale ale’ type of beer, with a harmonious balance between a marked bitterness (three types of hops are used to make it) and a pleasant fruitiness. The HOUBLON CHOUFFE is unfiltered, and re-fermented in the bottle as well as in the keg.

The beer pours yellowish in colour with a good white head and, yes, lacings are left behind as I sip. A glass lined with lacings shows that there is nothing added along with the malt such as corn or rice. There is a nice aroma which comes off this. It's a little yeasty perhaps with a little malt. I do not detect any hops in the aroma of this Belgium IPA.

Although the hops do not come through in the aroma, they are there in the taste. The beer starts with a little bitterness that fades for a moment and comes on stronger in the finish. I like the way it does that. Belgium brewers use a different yeast for their IPAs so the taste is quite distinctive from and English or West Coast American IPA. This beer is very well done and a little dangerous. It goes down too smooth and delicious for a 9%  APV IPA.

But am I complaining? No just sipping and enjoying

Thanks, Steve and Simone! Greatly appreciated!

This is the best beer I've ever tasted. Send more to Canada please!