Beer of the Week - Windoek Lager 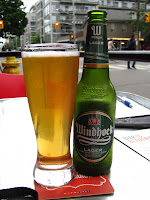 I'm sorry, Namibia. Geography is not my best subject and until I hit the Beer Markt this afternoon on the way home from work, I had never heard of you.

Feeling bad I did a Google search when I got home. Now I know that you are a country near the southern tip of Africa, bordering on South Africa, Botswana and Angola.

In 1920, Carl List and Hermann Ohlthaver took over four small breweries that were having great financial difficulties and formed South West Breweries Limited. When Namibia gained independence on March 21, 1990, the brewery changed its name accordingly to Namibia Breweries.

On the patio of the Beer Markt they serve Namibia Breweries Windoek Lager, named after the capital city of the Republic of Namibia. I had to give it a try.

So how was it?

The beer weighs in as a light beer at only 4% APV and poured golden in colour with a smallish white head that did not seem to last. I was now expecting a big brewery near tasteless lager but was delightfully surprised. There was a slight hop aroma to the beer but it was when I took a sip my entire preconceived perception disappeared.

This is a very nice lager!

It started off with a light taste then comes along a little hop action at the end. The big beer company advertisers use the word "crisp"  to describe their beer but their beers fall short. After a couple of sips, I was thinking that this is a nice tasting "crisp" beer. Jeff, my server who looked after me very well, asked me how I liked the beer and when I told him how I liked it, he said he enjoys it too and finds it a nice "crisp" beer. He went on to say that even though it is an African beer (my first hint as to where Namibia was), the brewery brews to the rules of the Reinheitsgebot (The German Beer Purity Law).

This is a very nice summer patio beer that I would order again. 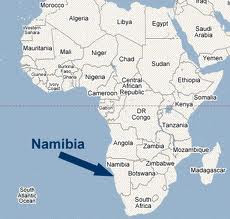 Labels: Beer of the week, Namibia